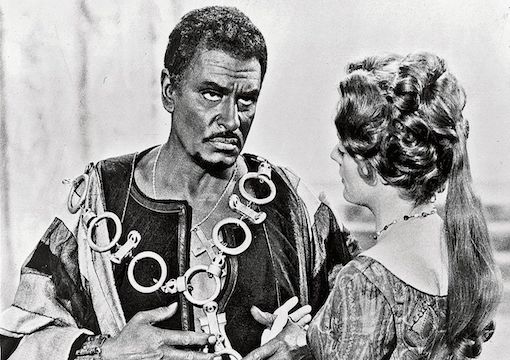 NEW YORK—I’ve never met anyone named Othello, certainly not in Venice nor in Cyprus, but perhaps there are men by that name in Africa. The only one referred to as Othello, but always behind his back, was the greatest of all Russians, Alexander Pushkin: “As jealous as Othello but twice as dark,” was what les mauvaises langues in court called the great poet. Pushkin had a great-grandfather general who was Ethiopian. I’ll get back to Othello in a jiffy, but first a few words about marital jealousy and Pushkin. The poet got a bee in his bonnet early on after marrying the beautiful but coquettish Natalia because she flirted, harmlessly but nevertheless disastrously. Innocent flirting might be fun in the English shires where men are more interested in killing birds and chasing foxes, but not where hot-blooded Russians are concerned. That’s where the Dutch ambassador’s bum-boy and adopted son, George D’Anthes, who swung both ways, comes into the story. The palace buzzed with gossip as D’Anthes danced nonstop with Natalia and flirted with her outrageously. Pushkin immediately challenged him to a duel, but the Dutch ambassador tried to cool him down and had his bum-boy son ask Ekaterina, Natalia’s sister, to become his wife. In no time Georgie Porgie became Pushkin’s brother-in-law. The Tsar declared the case closed. The poet did not fall for it, however—and rightly so. He challenged again and presented himself ready to fight without a second. D’Anthes the coward—he was an officer and familiar with weapons—shot first, mortally wounding Alexander the great. Like most cowards, D’Anthes lived to a ripe old age and died in Paris early in the 20th century.

So far so bad, as far as sexual jealousy is concerned. It certainly did in Pushkin, who should have known all about Othello and that psychopathic swine Iago, who at least got his comeuppance. Now Othello is back in the news, but not that American students have suddenly discovered Shakespeare. To the contrary, they think the Bard should not be taught because he’s all the things they hate and that I like, but we know all that already. No, the reason Othello is back in the news is because at the University of Michigan, a Chinese-born professor showed the sensitive ones a film of Othello starring Laurence Olivier. Larry appeared as the melancholy Moor in blackface makeup; students were “offended” and all hell broke loose. The irony is that the professor who showed the clips was himself a victim during the Chinese Cultural Revolution and had been roughed up by the Red Guards.

“The canceled have nothing to lose but the company of ghastly bores with bad breath and worse ideas.”

Not that such things matter where today’s little darlings are concerned. They were so angry they forgot to munch on triple-size hamburgers with lots of ketchup and gulp down giant-size Cokes. Professor Sheng is 66 years old and Chinese-born, but his groveling and apologies following the incident were those of a Nubian slave. Those provoked fresh outrage. His saying sorry was called “inflammatory” and left students feeling “unsafe and uncomfortable.” A senior by the name of Sammy Sussman linked other accusations on Twitter and you can guess the rest.

This absurd kind of situation is also happening in Britain, and I’m sure there have been worse instances of ridiculous demands by spoiled students, except that here in America it reflects more of a class struggle than it does overseas. It has nothing to do with moral rights, it has to do with the new elite versus those Middle Americans who were the nucleus of the American republic once upon a time. Now it’s the unholy alliance of the media, the Academy, Wall Street, and Silicon Valley that holds all the cards. This hostile ruling class is new but determined to wipe out that middle who voted for Reagan, Obama, and Trump, among others. Woke is the method as well as the weapon that has replaced the Stalinist midnight knock. With woke as the attacking cavalry, mass immigration, institutionalized antiwhite animus, and tech censorship serve as the occupying army.

A pretty bleak assessment, I admit, but with plummeting intellectual inquiry due to the campus gestapo, most people are keeping their heads down in order to avoid being canceled. Ironically, I was among the very first to be canceled about fifteen years or so ago when, during an Oxford Union debate, I told an American student who was complaining that she almost starved to death during Katrina “that you could do with a bit of a diet.” She was obese. I was booed and insulted by long-haired bearded types, especially when following the debate I referred to them as NOCDs. (Not our class, dear.) I was treated as a pariah by everyone involved, which came in rather handy. I had debated four times at the Union, had won three times, but more important on two different occasions had met two lovely girls whom I took out to dinner and clubbing in London afterward. I was already back then getting on in years, and chasing female students was getting ridiculous. In fact the canceling was manna from heaven: the cheap plonk offered by the Union, the inedible dinner, and the arrogance of males who have never been out in the world but think they know a lot made my canceling a happy occasion. So, canceled of the world unite, you have nothing to lose but the company of ghastly bores with bad breath and worse ideas. Yippee!