Cancel the Oscars, Bring On the Harveys 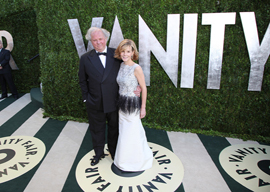 Two rather splendid dinners given in the Bagel by George Livanos and Mick Flick, where the subject of the faux Leonardo that sold for 400 million greenbacks—plus a $50 million fee for Christie’s—was a subject dissected again and again during the glitterati’s chitchat. Mind you, my fellow guests were not the types to be outraged or shocked at the obscenity of the moola involved, but it beat talking about the weather or why the media hates Trump as much as it does. For any of you who might have missed it, the phony Leonardo, painted by Leo’s bugger Giovanni Boltraffio, scrubbed over and repainted, was bought by—who else?—those people who have ruined football, the hooker market, yacht sales, and everything else they touch: the Gulf camel drivers from Abu Dhabi and their so-called Louvre museum.

Enough said about an unpleasant subject controlled by extremely unpleasant people. When the bubble bursts, some of us who actually appreciate art and are not in it for the money will be cheering, but not yet. Next New York outrage is a female column in that unspeakable old bag of a newspaper, and I quote: “The solution is putting people in positions of power who are not male, not straight, not white. This is not taking away something away unfairly—it is restoring opportunities that have been historically withheld.” Gee whiz, I thought that had been tried with affirmative action, and it was a real disaster. Now the girls over on this side of the ocean want to try it again, with cutie-pies getting the nod. Nurse, help! The power imbalance between men and women is about to change forever, with some hairy American lesbians leading from the front. Don’t hold your breath.

“Give me old-fashioned dictators with beautiful flaring breeches and boots any day.”

Everyone around these parts—except for people who are wellborn—seems to be doing a mea culpa nowadays. Harvey Weinstein got the ball rolling, and some moron who used to edit The New Republic has just written a self-flagellating meditation pouring ashes on his own dumb head for being white and well educated and having enjoyed “unearned privileges” that served to exclude others. Nurse, please, this is a real emergency. The guy is writing this bullshit in order to impress his peers about how anguished he feels about the free ride he’s had being a hack. All he has to do instead of showing off is quit his writer’s job and go out and start digging ditches, instead of showing off in such an absurd manner. Better yet, ditch the ditches and head for Africa and some leper colony, asshole.

Funny, but I’ve yet to feel guilty about being white and having had an education, and that’s because I skipped the latter and only thought of girls and sports, and in that order. I also do not feel, nor have I ever felt, guilty for having inherited wealth such as houses, furniture, pictures, and moola in a Swiss bank. And there’s nothing you can do about it, assfaces. Airbrushing the past is a lefty trick that cannot tolerate truth. The more they try to hide the past, the clearer it becomes. At least to those of us who don’t fall for PC bullshit.

Toward the end of a very hectic week I met with my buddy Sir Bob Geldof, someone who does not agree with me on most subjects, yet we consider each other very good friends. The first thing Michael Mailer asked Bob was when are they going to go after the rock & roll crowd for sexual harassment. Bobsie, as we call him, laughed out loud. “What they’ll say is yeah, we did, fuck you.” I love Sir Bob because he says it like it is, and although he had two beautiful redheads coming on to him, he mentioned “Frogette”—his wife—and that put a damper on their nocturnal dreams. At one point Bobsie said that I always take the side of the dictators, which I do, and that’s because there’s less hypocrisy involved. The left is as dictatorial as the right, if not more so, but they hide it with virtue signaling. The left’s desire to stop free thought and free expression hides behind the pose of holding the right views and positions. Maduro in Venezuela is a perfect example. Millennials who will not allow anyone they disagree with to speak at their universities is another. Give me old-fashioned dictators with beautiful flaring breeches and boots any day.

Finally, a prediction: Harvey Weinstein will not win any Oscars this year. What I am most proud of is that for 25 years Graydon Carter has very kindly invited me to the Oscar party. I have never attended because I loathe Hollywood and the people who lurk there. My children once went when they were very small. Now that he’s no longer editor, there will be no more invites and no temptation to go. This year it promises to be a real funeral. Of men. The speeches will slide into absurdity and irrelevance and will be all about how big ugly men have been mistreating cutie-pies these past couple thousand years. Make that three thousand. Hollywood has been lecturing us for much too long. Its sanctimony makes even old salts throw up. Cancel the Oscars. Bring on the Harveys.