Cannibalism Among the Oppressed 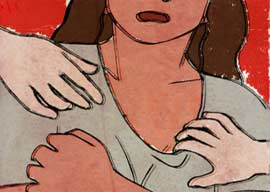 When big-bootied FLOTUS Michelle Obama was heckled last week by a grizzled lesbian activist who sort of resembles Glenn Beck with AIDS, the entire progressive coalition nearly came crashing to the ground.

Mrs. Obama was speaking about somethin’-somethin’ black when the activist interrupted her to start screaming about somethin’-somethin’ gay, at which point Obama left the podium to confront the woman. Video documentation of the event is scant, so it’s unclear whether Obama did that black-lady thing where they wag their finger and swivel their head.

“She came right down in my face,” said gay heckler Ellen Sturtz. “I was taken aback.”

Then, but of course, Sturtz was accused of using “white privilege” and “coded racial words” to play into ancient, hateful, and obviously disproved-by-science stereotypes of an “angry black woman.”

One can only imagine the furor if the lez had accused Michelle of chimping out.

“I take tremendous pleasure when my supposed enemies start shooting each other with friendly fire.”

A fat black lesbian who says she embraces the term “BlaQueer” to describe her multiple Identities of Oppression wrote a Huffington Post puff piece about how she couldn’t decide whose side to take:

I, like many other queer people of color, can’t separate my race and its history from my sexuality (or my gender performance/identity) and its history.

In the event’s wake, pro-homo serial event-interrupters Code Pink apparently made remarks critical of Michelle Obama on Twitter, then offered a groveling apology when told to check their privilege.

This shit never ends, and I love it. Since a white penis dangles atween my legs, progressive identity groups have designated me as their natural-born enemy. Therefore, I take tremendous pleasure when my supposed enemies start shooting each other with friendly fire.

One of the most fascinating aspects of the O. J. Simpson murder trial is that it forced the progressive-minded to take sides: Do they go against the woman-killer or the racist cop?

There are numerous examples of such seemingly insoluble liberal dilemmas, all of them hilarious to me.

Do you protect the environment, or do you allow the Third World to continue breeding like dusky hamsters?

Do you support Islam or the women who are getting their clits sliced off?

Do you come down on the side of unions or illegal-alien scab laborers?

Do you support Greenpeace or Injun whalers?

Do you oppose censorship or rape jokes?

Such constant squabbling usually devolves into pissing contests about who is more oppressed and who exactly is bullying whom.