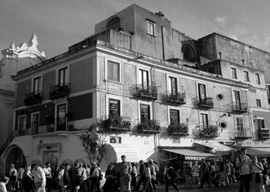 The Piazzetta on the Isle of Capri

On September 1, 1957, a pretty French girl by the name of Patricia and an Italo-French couple, Feruccio and Ellen, joined me in the old harbor of Cannes waiting to board the super-new luxury liner Cristoforo Colombo. Our destination was Capri, and we had decided to go on the spur of the moment. Capri’s season back then followed the summer months of the French Riviera, and as all four of us had just turned 21, we felt adventurous. “We’ll buy shirts and pants in Capri,” said Patricia. “They’re far prettier and cheaper; let’s just take our toothbrushes and go.” Back during those innocent times, travel was easy. One went onboard, bought an overnight ticket, and presto, we would be in Capri for lunchtime the next day.

Just then a dark-haired man wearing wraparound dark glasses came around waiting for his motor launch to take him to his yacht. He was Aristotle Socrates Onassis, then considered the richest man on Earth, and, as it turned out, a friendly one at that. I knew him slightly from El Morocco, the fabled New York nightclub, as he was a friend of my father’s. “What are you children up to?” asked the great man. Once we told him he simply said to forget the liner: He was on his way to Capri and we were welcome to have a ride on his fabled Christina. I remember him laughing when he inquired about our luggage—or, rather, the lack of it. So much the better. The four of us jumped on his launch and were onboard his boat in a jiffy. Once there, we were made to feel welcome by his wife, Tina Livanos, whose brother was and is a close friend of mine.

“I saw places such as Capri in their prime, which no one younger than me will ever see.”

Ari and Tina were extremely kind and sweet with us. Tina offered blouses to the girls, and Ari asked me if I needed any petty cash. We refused both, since not having to splash out for boat tickets had made us feel flush. Once we dropped anchor at the Piccola Marina the next day, we thanked our hosts and off we went to find rooms in the fabled isle.

Capri back then was a paradise. There were no tourists to speak of, no cruise boats, no day-trippers, no backpackers—just rich foreigners who owned houses there and well-to-do Italians. There were titles galore: Princess Bismarck (formerly Mona Williams), Princess Mafalda of Savoy, Prince and Princess Hercolani, Count and Countess Crespi, Countess Ciano (the daughter of Mussolini), and even King Farouk of Egypt, the corpulent sybarite who hung out at the Piazzetta, where the fabled Hotel Quisisana was located. But the uncrowned king of Capri was an openly gay American named Bob Hornstein, whose house, the Villa Capricorno, was said to hold the best parties in town and whose invitations no one—except for Graham Greene—ever turned down.