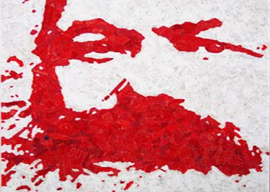 Italian communists always wanted a revolution in Italy, but I do not think that this is quite what they had in mind: A Chinese man has just bought the bar at their party headquarters in the city of ForlÃ¬ in the “red” Romagna region where I live.

Attached to the party’s headquarters, the bar is called the Carlo Marx, and the name is written in huge red letters on an enormous white billboard above the terrace outside.

Will the new owners, hailing as they do from the world’s most powerful remaining communist country, change the name to the Mario Tse Tung?

Will they construct suicide nets like those erected around Foxconn’s factory in China to deter the bar’s depressed clients from throwing themselves off the roof? Or maybe banners that warn, “Work hard on the job today or work hard to find a job tomorrow”?

Until the Berlin Wall fell in 1989, Italy’s Communist Party”the Partito comunista italiana (Pci)“became proportionally the largest in the capitalist world after World War II and Italy’s second-most-powerful party, polling about one-third of the vote in its 1970s heyday.

“You try to explain that communism and fascism have much more in common with each other than either does with freedom and democracy, but you waste your time. Their faith blinds them to the facts.”

Allegedly bankrolled by the Soviet Union, it never quite managed to get control at the national level but dominated local government in regions such as Romagna and neighboring Tuscany. One of the more bizarre consequences of this is that I often come across Italians named Vladimiro, Yuri, or Comunardo.

The party headquarters where the Carlo Marx is located was where ForlÃ¬’s rank-and-file local communists came to drink, play cards, and remind each other that all property is theft unless the Pci owns it.

When Soviet communism collapsed, the Pci did not. It simply changed its name a few times. Currently it is called the Partito democratico and is still in power at the regional level.

As someone who believes that communism means tyranny, not liberty, and who was once described fairly accurately by the Corriere della Sera newspaper as an “anarchico thatcheriano“ (Thatcherite anarchist), communism never appealed to me. Your average lefty around here brands anyone that disagrees with them as “un fascista.”

You try to explain that communism and fascism have much more in common with each other than either does with freedom and democracy, but you waste your time. Their faith blinds them to the facts. The only other possible reason to have gone to the Carlo Marx would have been in search of women. But I learned long ago that it is not only hard-left politics that lack sex appeal; so do hard-left women.

It was with such thoughts buzzing about my brain that I parked my Land Rover Defender alongside the bar one morning last week and strolled across the terrace outside, underneath the enormous Carlo Marx sign, and up the steps leading inside.

The old owners are a local couple, Giuliano, 57, and his girlfriend, Silvia, 45. They still had a couple of days left at the wheel. After three years, they could not wait to get the hell out. Too much stress. No profit, only debts. They were not even ex-communists, let alone communists. They did not like communists, who never spent any money and expected everything for free. And they disliked the euro even more, which they blamed on the communists. “We only get through 13 or 14 kilos of coffee a week in here,” said Giuliano. “It’s not human.” Referring to the Carlo Marx billboard, Silvia exclaimed: “As for quel cazzo di scritta (that fucking sign), it just puts people off coming here.”