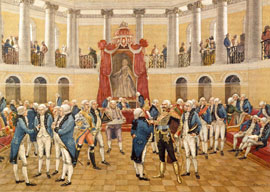 GSTAAD—The subprimate level of conversation, as prevalent as the snow up here in the Alps, took a turn for the better last week when a select few celebrated Prince Nicolas Romanoff’s ninetieth birthday at the yacht club. Yes, most people who live up here are illiterate, but they sure know how to count—some even up to ten billion.

None of the counters were present at the birthday, just many old friends that included some of Europe’s oldest and most royal families. There were no camel drivers, thank you very much, and no Russian oligarchs: just “Former People,” as Douglas Smith named his heartbreaking book on the Russian aristocracy’s final days. Buy that book (published last year by Farrar, Straus and Giroux) and weep through it. Caught up in the maelstrom of the revolution that was to prove that when society’s lower elements prevail, the outcome is always a hundred times worse than what it replaced, this is a chilling tale of looted palaces, desperate flights, cold-blooded murders of innocents (especially women), and marauding peasants and so-called red soldiers butchering the helpless.

“It’s like trying to clean up Chicago with Al Capone as mayor.”

Funny how little one reads about the cold-blooded murders of the Russian aristocracy; not that Hollywood has done much better. (There are a couple of bad films about Rasputin showing the Russian prince who killed him as a drunken poof. Yusupov was homosexual but a gentleman and married to a great beauty.) For that matter, the Soviet soldiers’ rape of three million German women in World War II’s aftermath hardly gets a mention.

Two great families that survived the 1917 holocaust were the Sheremetevs and the Trubetskoys. “Survived” is a relative word; a terrible picture in the book taken shortly before Eli Trubetskoy’s death in Moscow’s Butyrki prison on February 7, 1943 shows her haggard face after years of torture and her beautiful blue eyes and aristocratic disdain for her captors as obvious as the horror around her. As luck would have it I dated two young girls very long ago named Sheremetev and Trubetskoy: Xenia in Athens (with who I am still in contact) and Sophie in Paris (who sadly committed suicide). But this is getting too depressing.

Nicola Romanoff’s party certainly wasn’t depressing. His grandchildren, one of them a real beauty, gave toasts. Nicola, who is very tall and handsome, responded in a strong voice without once becoming emotional. I suppose after Ekaterinburg not many things bring a lump to one’s throat. I sat with King Constantine and his sister-in-law Princess Benedikte. The Greek King gave a very good speech, pointing out that Nicola was the first Romanoff to reach the age of ninety, just as in his family, the first ever to reach that great age is Prince Philip.