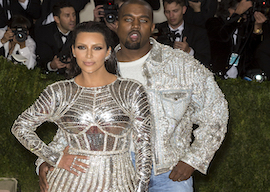 Pat Buckley would be spinning in her grave if she knew what has happened to the Met Gala she used to cohost with Blaine Trump.

It wasn’t always so. The gala used to be the high point of the social season, when A-list matrons wore their chicest couture and their biggest diamonds.

Grandes dames like Betsy Bloomingdale flew in from the California. Marylou Whitney came up from Kentucky. The walkers, Jerry Zipkin and sprightly Johnny Galliher, would be charming the likes of Nan Kempner, Judy Peabody, and Deeda Blair.

I generally detest charity benefits, with their boring auctions and windy speeches, but this really was the party of the year, and I was happy to go. I’d ogle the décolleté, drink too much wine, and leave as the young hordes of FIT students arrived for after-dinner dancing at the Temple of Dendur.

Now I wouldn’t go even if you promised me a seat between Gisele Bündchen and Naomi Campbell. I wouldn’t know a soul.

Pat and Blaine would fret over the seating for weeks to make sure every table had the right mix with a supermodel sprinkled in to perk up the old codgers as they tucked into their room-temperature filet mignon from Glorious Food.

The hostesses were careful to keep a man and wife as far as possible from the man’s mistress. But when Sid Bass brought his new wife to the gala, a friend of Anne Bass’ cracked, “Sid traded in his wife for a used Mercedes.”

“I generally detest charity benefits, with their boring auctions and windy speeches, but this really was the party of the year.”

There were no costumes. All the men were in black tie, shawl collar or double-breasted, patent leather or velvet shoes. The biggest fashion excitement was the year several women—I won’t name names—unwisely wore the Christian Lacroix balloon dress.

Then Anna Wintour took over and figured out how to monetize the mania on the red carpet, and the party was over. Blaming Wintour for the demise of the ball would be like condemning her for global warming or the decline of Condé Nast. It’s not her fault the world has changed. Blame selfies and Instagram.

The event last week raised an astonishing $15 million, but not from the wealthy Upper East Siders who used to buy tickets. They are gone. The pop stars who attend now go for free as guests of the corporate sponsors who pay for everything.

The gala is one huge photo op for marketing and promotion.

Marshall Heyman, covering for The Wall Street Journal a few years ago, complained that the celebrities at his table didn’t eat and didn’t talk. When they weren’t in the bathroom smoking, they were texting on their phones about the after-parties they couldn’t wait to get to.

The Costume Institute’s new show, “Camp: Notes on Fashion,” provided the theme for the gala, but I seriously doubt any of the attendees had read Susan Sontag’s 1964 essay “Notes on Camp.”

“If homosexuals hadn’t more or less invented Camp, someone else would,” stated Sontag, who decades later became the lover of Annie Leibovitz and stopped using the pejorative H-word for LGBTQ.

The show traces Camp from the powdered wigs of Versailles through Oscar Wilde, but the historical context might have been lost on Katy Perry, who dressed as a chandelier and then a hamburger.

Kim Kardashian, showing off all her curves, evoked nothing so much as the Venus of Willendorf, the fertility fetish that predates Camp by about 30,000 years.

Gaga’s act was more Vamp than Camp, but Wintour will be sure to invite her back next year. She gets clicks.

Pat Buckley and I will happily stay away.