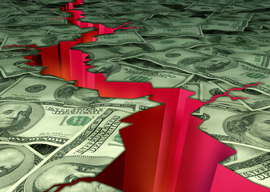 Comes now news from across the pond that executives at one of the world’s most respected banks, Barclays, rigged Libor. Even the venerable Bank of England is apparently being investigated.

For sports fans, this is like fixing the Super Bowl or doping a horse in the Derby. But it is rather more serious. For the London Interbank Offered Rate is the benchmark interest rate for trillions in loans around the world.

Manipulate Libor a small fraction of a point, and lenders reap millions more in interest income on hundreds of billions in loans.

How many more such blows to their credibility can the financial elites sustain before people turn on the capitalist system itself?

Charging “money-changers in the temple of our civilization” with moral culpability, FDR became the century’s most successful politician.

“But now something beyond the incompetence of the financial elite and the big banks may be putting capitalism in peril—an unmistakable odor of amorality, sleaziness and corruption.”

Demagogic, perhaps, but in 1936 FDR would carry every state but Maine and Vermont.

In recent decades, a series of shocks has fertilized the ground for a populist assault on global capitalism. In Europe, radical parties of the right and left are rising—to overthrow the establishment center.

Manifest incompetence is but one cause of the sinking confidence in our financial elite. In the Latin American debt crisis of the 1980s, our idiot-bankers had to be bailed out with Brady bonds. In 1995, one year after NAFTA passed, Mexico threatened to default. Goldman Sachs was bailed out of its huge Mexican exposure by a loyal alumnus, Treasury’s Robert Rubin, who dipped into the U.S. Exchange Stabilization Fund.

In the Asian debt crisis of the 1990s, Rubin and Alan Greenspan led the bailouts. Asia’s nations devalued and began exporting heavily to the United States to earn the dollars to pay back their loans.

Who paid for that bailout? U.S. workers who lost manufacturing jobs when cheap Asian goods poured into the U.S. market, forcing the closure of U.S. factories.

The Great Recession of 2008-2012, too, is the creation of a financial elite and political class who have largely escaped its consequences.

George W. Bush and Congress pushed banks to make home loans to individuals who were credit risks. Fannie Mae and Freddie Mac bought up the subprime mortgages and bundled them together into securities. Big banks traded them like gilt-edged bonds. When the whole house of paper collapsed in 2008, the banks screamed: “We’re too big to fail. If we go down, the country goes down.”