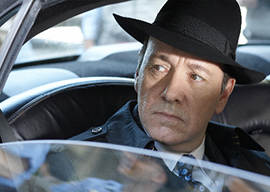 Casino Jack is a consistently amusing biopic starring Kevin Spacey as the manic, bull-necked Republican lobbyist Jack Abramoff, who recently spent three and a half years in prison for, as far as I can tell, running a little more amok than is considered seemly among Washington insiders.

As Abramoff brushes his teeth in the opening scene, he pumps himself up for a long day of throwing his weight around with his own personal 1980s action-movie catchphrase: “I am Jack Abramoff and, oh yeah, I work out every day.” When Abramoff escorts his Indian-chief clients in eagle-feather headdresses into the Oval Office, George W. Bush greets him with, “Hey, Buff Guy, what are you benching?”

Granted, a timelier movie could have been made about, say, Tony Rezko, the current president’s old friend and fundraiser, who is still being held in an undisclosed location awaiting sentencing. A half-decade ago, the press thoroughly covered Abramoff’s career of fleecing crooked Indian tribes to fund a sniper school for West Bank settlers. In contrast, the Chicago Democratic operative’s similarly wacky life (as the business brains behind the Nation of Islam, Rezko managed the Black Muslims” most famous convert, Muhammad Ali) remains almost unknown due to the media’s aversion to mentioning anything interesting about Barack Obama’s background.

“Spacey empathetically portrays Abramoff as someone much like himself, an ingratiating Hollywood hustler who can”t resist doing impressions of his favorite movie stars.”

A stage actor of superb vocal facility, Spacey became a movie star in the 1990s by playing villains, monsters, and antiheroes in The Usual Suspects, Seven, and American Beauty. But he’s not actually a deep, dark character. Spacey is more an energetic showman who wants to make audiences happy. Hence, a decade ago when he finally became able to make movies he likes, he quickly wrecked his film career by starring in sappy stories such as his silly (but often show-stopping) labor of love, the 2004 Bobby Darin biopic Beyond the Sea.

Democrats are disappointed that Spacey doesn”t play Abramoff as the locus of all evil, the second coming of Keyser SÃ¶ze. Instead, Spacey empathetically portrays Abramoff as someone much like himself, an ingratiating Hollywood hustler who can”t resist doing impressions of his favorite movie stars.

The son of a Beverly Hills marketing executive, Abramoff became an Orthodox Jew at age 12 after seeing Fiddler on the Roof. A jock at Beverly Hills High, he was acclaimed for his relentlessness in the weight room. Abramoff then teamed with Grover Norquist and Ralph Reed to take over the College Republicans, after which he organized a fan club for beefy Angolan warlord Jonas Savimbi.