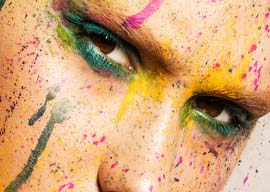 Ours is a golden age of expensive cheap trash”or is it cheap expensive trash? Such, at any rate, were my thoughts on leafing through a catalog of a luxury gewgaw and clothes manufacturer, whose name I shall not reveal. The catalog was lying about in a friend’s house in New York and I picked it up because I pick up anything that has the form of a book. I am like Somerset Maugham, who once said that he would rather read a railway timetable than nothing at all. Indeed, reduced sometimes in a hotel bedroom to a telephone directory (in the days when such things still existed), I have derived considerable pleasure and instruction from its pages.

Anyhow, the catalog was even more instructive about our society than a telephone directory (I never knew until I read the latter that there were so many private detectives in practice). Apart from confirming the old saw that a fool and his money are soon parted, the catalog established beyond much doubt that good taste is like good sense, in other words not universal in time or place. It depends for its development and continuation on character, genetic endowment, and cultural environment. Nothing is so trashy nowadays that it cannot be marketed and we will not buy it.

“The models looked as if they would have nothing to say if spoken to, their brains reduced by starvation to a boring self-obsession.”

The clothes offered in the catalog were tawdry, the sartorial equivalent of much modern architecture, that is to say without elegance or unified design, elements cobbled together in the hope that something worthwhile will emerge. No absurd price tag could disguise the aesthetic cheapness of the designs, or their resemblance to the products sold in the cheapest stores and worn by the denizens of modern slums. No doubt this was part of the catalog’s cunning: It managed by its prices to appeal to snobbery and by its designs to democratic, or demotic, sentiment. Its designs might be called proletarian chic, usefully shortened to prolechic.

Needless to say, no one who adopts prolechic as his style wants actually to be a prole, or do the work that proles do. He keeps their sympathy at a strictly symbolic level.

At least as interesting, sociologically, as the clothes themselves were the models who wore them. I don”t know whether the company follows fashion or makes it, or whether there is some dialectical relationship between the two, but the models were distinctly freakish, the women half-starved and the men half”both starved and androgynous.

More than by anything else, however, I was struck by their facial expression. It was surly, sulky, sullen, sour, and morose. It was the kind of expression to which only thoroughly spoiled brats might aspire. Even in my far-off days as a lazy and impertinent youth, I would never have adopted an expression half so insolent. Two of the men, however, managed also the clenched and cruel facial habitus of camp guards or officers, one German and one Japanese. The nearest the others came to an active expression was a petulant pout. As a group of young men and women they could hardly have been less attractive. It is true that, for the most part, they were not of the type whom one would cross the road to avoid; rather they looked as if a gust of wind might blow them over and the slightest impact snap their bones. But they looked as if they would have nothing to say if spoken to, their brains reduced by starvation to a boring self-obsession.

To whom would such models be attractive? As I looked at them, fascinated in the way that the morbid always fascinates, I could not help but think of Sir Thomas Beecham’s characterization of the sound of the harpsichord: skeletons copulating on a tin roof. The world had evidently disappointed them, there was nothing in it for them, their expensive clothes notwithstanding. I had seen happier people in a displaced persons” camp. What cataclysm, what civil war, had they suffered?