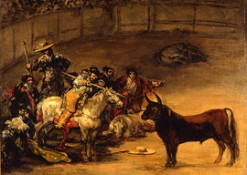 At the end of the film Little Caesar, the gangster Enrico Bandello, played by Edward G. Robinson, is shot down by the police. As he dies in the gutter, he asks, “Mother of mercy, is this the end of Rico?” Reading that the Catalan provincial assembly decided last Wednesday to shoot itself in both feet, as well as gore itself in the thigh, by making bullfights illegal, I asked myself, “Madre de Dios, is this the end of the corrida?”

In Catalonia, the argument was put in terms of the bull’s anguish. Opponents of the ancient art of tauromachy were correct in stating that the toro bravo endured pain in his fifteen minutes facing men on horse and foot. Their motive, however, was anything but humanitarian. As with the British Hunting Act of 2004 that rendered illegal all hunting of foxes with dogs, the inspiration was political. In Britain, class warriors sought to stop people in the rural areas whom they regarded as “toffs” from enjoying themselves. Their targets were the aristocracy, the gentry and the rich. Of course, most of those who rode to hounds were from all classes. Traditionally, farmers hunted in the winter when the land lay fallow and there was not much else to do. If not for the hunt, the only places people met in winter were the pub and the shopping mall.

The ban in England was intended to strike a blow against what hunting’s opponents believed was an oppressive upper class. Yet genuine exploiters of the poor devote their time to manipulating markets, lending money at usurious rates of interest and peddling arms to third world dictators. England’s angry brigades, instead of focusing their ire on the bankers and traders who take a share of the economy out of all proportion to their ostensible contribution to it, turned on a vulnerable community of farmers, farm workers and animal lovers (yes, most hunters do love their animals) to produce the (Anti-) Hunting Act.

A similar coup has just occurred in Catalonia. Although backers of the law spoke of defending bulls, what they were really defending was Catalan nationalism against Spain and traditions they believed to be exclusively Spanish. Parliamentarians who have never faced a cow, let alone a Miura bull, have deprived brave toreros and those who work with them of their livelihoods. Catalans who love the corrida must now cross the border to witness a spectacle that they and their ancestors have adored since 1387. Why? Because they contend that the corrida de toros is a Spanish imposition, which it is not. Nonetheless, Catalan nationalists are asserting their differences from the rest of Spain. The Catalan language, Catalan customs, Catalan modes of dress and Catalan food must, to the nationalists, displace everything that came from Spain. Eliminating everything remotely Spanish is intended to prepare the ground for the day when Catalonia takes its seat at the United Nations. For that reason, and that reason alone, bullfighting had to go.

“The corrida has inspired the other arts: writers, painters, sculptors, composers and playwrights have all depicted the heroic struggle between man and beast in the most beautiful terms. If the ban spreads beyond Catalonia to the rest of Spain, France and Latin America, much will be lost.”

George Orwell, lamenting the purge by Catalan Stalinists of anarchist-socialists in 1937, wrote in Homage to Catalonia, about Partido ObreroUnificaciÃ³n Marxista (POUM) cadres who had fought bravely against Franco’s army. The Stalinists not only murdered them, but labeled them fascists. Orwell wrote, “This kind of thing is a little difficult to forgive.” I find it hard to forgive lawmakers who defame brave men and a few women for practicing a dangerous art that, while admittedly cruel to magnificent animals, provides beauty in an increasingly ugly world. They will allow cattle to be tortured to death, far from public view, over many hours in the province’s slaughterhouses.

The new British Conservative-Liberal Democrat Coalition repealed the Hunting Act shortly after it assumed power in May. Enforcement of the law was impossible, and it became a joke, as the last British government forgot the first rule of leadership taught in every military academy on earth: Never give a command you do not expect to be obeyed.

Repeal of the ban on bullfighting in Catalonia may also come one day. Catalan aficionados will watch bullfights in other Spanish provinces, as well as over the border in southwest France. Some villages and ranchos may hold fiestas in which boys will practice their skills. And so, when Catalans gain their independence, they may dispense with the nationalist chip on their shoulder and repeal the ban.

As an art form, the corrida has inspired the other arts: writers, painters, sculptors, composers and playwrights have all depicted the heroic struggle between man and beast in the most beautiful terms. If the ban spreads beyond Catalonia to the rest of Spain, France and Latin America, much will be lost. Think of Picasso’s “La Corrida” and his “Death of a Torero,” or Goya’s “A Village Bullfight.” Remember Collins and La Pierre’s biography of El Cordobes, Or I”ll Dress You in Mourning, and Barnaby Conrad’s Matador and Death of Manolete. These works of art would not exist but for the art on which they are based. And, if the Catalan ban spreads, there will be no more.

My own association with bullfighting began when my mother, who also introduced me to horse racing, casinos and J. D. Salinger, took me to my first corrida. I was nine years old. It was not shocking. It was thrilling. Since then, I”ve followed the bulls to Mexico, Seville, Madrid, Pamplona and small villages where homespun plazas de toros provide the only alternative to the isolation of television and computer games. My old friend Nick Scott and I ran with the bulls in Pamplona some years ago, and I”ve taken my children to see the corrida. When you have seen a great matador like Francisco Rivera Ordonez, about whose grandfather, Antonio Ordonez, Hemingway wrote in The Dangerous Summer, you cannot dismiss the spectacle or the courage as something mean. In a great corrida, the bull is honored for his dignity, strength and beauty.

The first thing I published in a real newspaper appeared in the Los Angeles Times in, as I recall, 1971. It was a letter to the editor, complaining that his correspondent called bullfighting a “sport.” It is not a sport, never has been. It is a ritual death of the bull, closer to the Mass, also a celebration of death, than to football. Now, almost forty years later, the L.A. Times repeated its folly with a website headline: “Defenders of the sport see it as a hallowed tradition, but opponents deem bullfighting barbaric.” Those who call it a sport should have no say in banning something they do not understand.