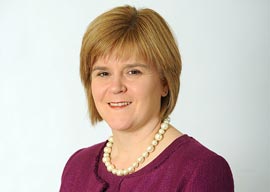 Britain’s new multi-party politics has pundits and bookies salivating at the prospect of minority governments, hung parliaments, awkward alliances, and kingmakers after the May 7th general election. What most of them do not seem to realise is that this sudden plethora of parties masks old choices.

This was demonstrated amply on the 2nd of April, during the two hour TV debate between the leaders of the Conservative, Labour, Liberal Democrat, Scottish National Party, Plaid Cymru, Green and UKIP. Seven million voters watched from home, as the seven statespersons gave themselves up to two hours of sweaty salesmanship under the stern, dental nurse-like stare of compere Julie Etchingham.

“The truth is that the new much-vaunted multi-party politics mask an older, simpler cleavage – the classic division between “the forces of conservatism,” and the forces of change for change’s sake.”

Nicola Sturgeon of the Scottish National Party was widely dubbed the “winner” of the debate, with a 28% watcher approval rating. But in this highly partisan context, “winning” means little more than (a) being a woman, and (b) being stodgily and safely leftwing. The SNP’s single unconventional idea is withdrawal from the United Kingdom – and on this they were roundly defeated in last year’s referendum by 55% to 45%. Aside from that, their policies could have been cut-and-pasted from any student union newspaper – big public sector, globalism, full participation in the EU and fulfillment of all real or supposed international obligations, the pound remaining as the currency, the enforcement of equality and encouragement of immigration. Their rejection of London is at a deep level a rejection of the traditional West. At least some referendum voters must have asked themselves what exactly was the point of independence on such terms. Their stance on immigration is morally satisfying to SNPers who no longer believe in God, but still enjoy a spot of guilt – it is also safe, because few immigrants ever opt to live north of Hadrian’s Wall.

The same great skills of leftwingery plus ladyhood were widely praised in the other two women on the panel, Leanne Wood of Plaid Cymru, who wants to do to Wales what Sturgeon is doing to Scotland – and Natalie Bennet of the Green Party, which wants the same things but faster, and has added a few comic touches of its own, like abolishing the army and the Royal Family.

For all her twinkly Cymric charm, and mellifluous Rhondda accent, Leanne Wood seems less well thought-through than a minor character from How Green Was My Valley. Poor Strine-speaking Natalie Bennett could never hope to compete in the euphony of accent stakes, but she did earn compensatory points for avoiding another high-profile “brain fade“ of the sort that saw her floundering miserably in a radio interview as she tried to remember Green policy on something or other. (In fairness to her, those policies are eminently forgettable.) Meanwhile, David Cameron alternated between robot and slightly embarrassed vicar, Nick Clegg did a passable impersonation of a Scientology hustler, and Ed Miliband played his usual Mr. Bean.

The supposed “loser” of the debate, Nigel Farage of UKIP (20%), was the only leader who said anything unexpected, or that sounded unscripted. He was also the only one who stirred deep emotions both among the panel and out in Viewer Land.