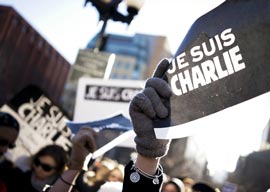 I am not Charlie, nor will I ever be. Wearing a Je suis Charlie badge is one sure way of getting attention, but I will leave that to others. And another thing: Obscenity has no redeeming social value, and Charlie Hebdo was and is one long obscenity.

But let’s start with that famous Parisian march of mourners, one that had more criminals in its front row than a Mafia funeral. How is it possible that the gangster who calls himself the Emir of Qatar went marching and pretending to honor the dead journalists when it is he who is the main financier of the jihadists in Syria, Iraq, Egypt, and Libya? Why was Netanyahu on the front row, when it is he and his fellow zealots who killed more than 500 innocent Gazan children among more than 1500 civilian dead last summer and bragged about it afterward while pretending to be victims? Why did Angela Merkel bother to march when on that same morning she was accusing Germans who wish to control Muslim immigration that they “have hate in their hearts”? If this were a movie, people would laugh it off the screen.

Last but not least, how can a government be taken seriously when it invites so many gangsters but does not allow the leader of one of the largest French parties to attend”incidentally the only French party that has opposed the Islamization of France since its conception”the National Front?

“Personally, I do not regard an insult to my religion as a capital offense, but then I”m a civilized person and the Muslims who did the killing were not.”

Mind you, what I”m about to say has cost some commentators their jobs, but for some strange reason I don”t think it will cost me mine. Charlie Hebdo was and is a poor excuse for a magazine”a vicious, coarse, and cruel libel machine that treats religion as a form of deviance. Showing the Pope holding a condom above his head and intoning the Eucharist””This is my body””could have got the magazine firebombed but didn”t, as we Christians have become used to insults.

Not so the Muslims. They know how to stop these affronts, and I”ll bet my bottom dollar that after the rage over the killings subsides, not many covers will appear showing Mohammed’s face. Another cover had the Virgin Mary giving birth to Christ, and another had Jesus sodomizing a bearded God. I am sorry to describe such horrors in detail, but it’s the only way I can convince you that the people who died at the hands of the terrorists were not just innocent bystanders. Actually, those who drew the cartoons were obsessed with bare bottoms and buggery, and made a good living by insulting religions and those who believe in them. Personally, I do not regard an insult to my religion as a capital offense, but then I”m a civilized person and the Muslims who did the killing were not. It’s as simple as that.

Let’s face it. Everything that appeared in Charlie Hebdo was intended to cause pain, and to infuriate those who believe in religion. It called itself a humorous weekly but only a sick person would find any humor in it. Which brings me to the freedom of speech conundrum. Many millions of freedom-loving Europeans are now identifying with the magazine, one they had never heard of before the murders. But that’s identifying themselves not with freedom but with intolerance and viciousness and many other evil things. And as far as freedom of speech is concerned, this freedom is selective at best. In America, neo-Nazis were allowed to march in Illinois while giving Hitler salutes, but this could never happen in the continent that calls itself the cradle of civilization. David Irving, the notorious historian who challenged the number of Jews killed by the Nazis, spent two years in an Austrian jail for that alone.

Finally, in the Arab world, severe punishment and a cruel death await those who dare challenge religion. Arab despots do not tolerate the slightest deviation from what they interpret the Koran to say. The only secular leader is Bashar al-Assad, and we all know the trouble he’s in. Religion in the third world is used to eliminate opponents and to keep people in line. Yet the European Union has made it possible for terrorists to move freely throughout the continent without border checks or controls.

And even after a terrorist commits a crime, he or she is not necessarily deported if they have any connection with a European citizen. They call it the Human Rights Act. Political correctness overrules the people’s safety. Christians, however, have been arrested for quoting the Bible in the street, for fear of giving offense to minorities. One man’s free expression may be another man’s hate speech, but the Europeans have yet to figure this one out. At best it is a travesty, at worst it means having the freedom to murder innocents in the name of the prophet. Charlie Hebdo‘s hacks paid the ultimate price for blasphemy. I was as appalled as the rest of you, but then I never agreed to turn Europe into a hotbed of terror by Muslim immigrants who refuse to integrate.