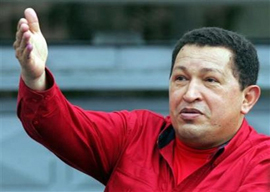 During Benedict XVI’s recent trip to Cuba, the brothers Castro tumbled out to meet the pontiff. But there was another noted visitor to Cuba at the same time”one there for cancer treatment who may or may not have met with Benedict”Venezuelan President Hugo ChÃ¡vez.

ChÃ¡vez, who has replaced the Castros in the pantheon of US opponents in Latin America, has been in office since 1999. Deriving inspiration from the Cuban example, he has spearheaded the so-called “pink tide“ engulfing the region during the 21st century. Even under Barack Obama, ChÃ¡vez has been the White House’s Public Enemy Number One in the area since his election.

Not only has ChÃ¡vez’s “Bolivarian Revolution” breathed an appearance of life into the zombie that is socialism, his program has led him to directly oppose US supremacy in Latin America. He opposes free trade, preferring a species of autarky which he has failed to achieve. He has, however, managed to nationalize a number of companies both domestic and foreign-owned. Although roundly defeated in his radical attempt to alter the country’s Constitution in 2007, the electorate passed a more modest amendment two years later which abolished term limits. ChÃ¡vez’s gathering allies in Ecuador, Bolivia, and elsewhere, as well as his supposed support for Colombia’s rather nasty FARC rebels, have worried Washington.

Despite American support, every effort to unseat ChÃ¡vez”legal or otherwise (such as the 2002 attempted coup)”since his ascension to power has been unsuccessful. But he has suffered a few rebuffs, most notably in 2007 at the Ibero-American Summit in Santiago, when Spain’s King Juan Carlos (head of the sponsoring Organization of Ibero-American States) famously told him to shut up. While many of ChÃ¡vez’s domestic and foreign opponents (the Spanish speakers, anyway) took up the cry, ChÃ¡vez later accused the King of trying to revive Spanish colonialism.

Although Hugo’s parents are pious Catholics, he has been at odds with the Catholic Church since he came to power, famously calling it a “tumor” on society. In response, the country’s bishops have repeatedly condemned his authoritarianism. His much younger and charismatic opponent in the upcoming October presidential elections, Henrique Capriles Radonski, is devout. He rediscovered Catholicism while in prison in 2004 and was accused (then acquitted) of complicity in the 2002 coup. ChÃ¡vez may be changing his tune: Whether or not he saw Benedict XVI, he recently asked Jesus on national television to cure his cancer and made a point of being seen at Easter Mass.