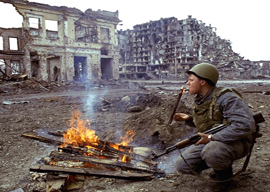 Over the last few days, as I watched both the homicidal antics of the Boston Bomb Brothers and the characteristically competent Tom Cruise science-fiction movie Oblivion, I was reminded that one of the least expected developments of my lifetime has been how the vast majority of the world’s population is no longer expected or even encouraged to be liberal. At least they are not asked to be “liberal” in the mid-1960s Star Trek sense, meaning obeying a universalist ethic that values all individuals equally.

Instead, the world’s six billion or so nonwhites are now told to be as conservative as possible. I’m using “conservative” in the sense of being naturally ethnocentric, of having loyalties emanating in a concentric pattern, radiating outward from self and nuclear family to extended family, clan, tribe, nation, religion, or race.

Thus, in the 21st century, practically nobody thinks that there is anything wrong with blacks voting almost universally for Barack Obama because he’s black. Those blacks are merely expressing their admirable racial solidarity.

Likewise, consider the immense marketing campaign for amnesty that was proceeding so smoothly until those Chechen immigrants started acting so Checheny. Almost the entire Establishment has been inciting racialism among Mexican-American voters. The press has been demanding that Mexicans get angry if any American dares stand up for laws against illegal immigration. Why? Because keeping Mexican nationals out of America is an insult to their race.

The notion that a Republican politician could stand up and ask Mexican-American voters to demonstrate their loyalty to America by voting against illegal immigration because it is, on the whole, bad for their fellow American citizens is simply unthinkable today. Asking Mexicans to think in sophisticated legal terms such as “citizen” instead of crude biological terms such as “race” has become too advanced for today’s advanced thinkers.

The Tsarnaev Brothers lived in the absolute heart of liberal intellectual America”in Cambridge, Massachusetts, less than two miles from both Harvard and MIT. Therefore, you can be confident that they were never instructed that they owe anything to the country that let them in.

That would be insensitive. Instead, they should display pride in Chechen culture.

Of course, it would be bigoted for anybody to notice anything about Chechen society, such as its ancient tendency toward valor and violence. These two maniacs come from a long tradition of brave psychos. The Tsarnaevs acted out on the streets of Boston a traditional role in Chechen culture, the abrek wild men who leave behind all domestic comforts to devote their lives to vendettas against enemy ethnicities.

Chechens play a remarkably large role in classic Russian literature, greater than any single American Indian tribe does in American letters. The Chechens were admired by Pushkin, Lermontov, Tolstoy, and Solzhenitsyn for the adamantine atavism of their bandit barbarism. Their absolute lack of Christian universalist guilt fascinated and appalled the great Russian writers.

For example, Tolstoy’s novel The Cossacks is about the Christian ethnic group that intermingled Russian and Chechen mores. Tolstoy described the influence of the “half-savage Mohammedan tribes” on the Orthodox Cossacks:

Living among the Chechens the Cossacks intermarried with them and adopted the manners and customs of the hill tribes, though they still retained the Russian language in all its purity, as well as their Old Faith….Even now the Cossack families claim relationship with the Chechens, and the love of freedom, of leisure, of plunder and of war, still form their chief characteristics.

On the other hand, unlike everybody from Barack Obama to Tamerlan Tsarnaev, people descended from European Christendom are not allowed the simple ethnocentric pleasure of rooting for their own kind. They alone must be liberal.

Over time, however, the essence of modern liberalism has decayed from universalism and fair play to priding oneself on one’s “leapfrogging loyalties” in siding with The Other rather than those annoying fellow citizens to whom you feel morally superior. Cinematic examples include the Marine who joins the noble blue space Indians in Avatar and the Boer bureaucrat who helps the feckless flying saucer refugees in District 9.

Yet even whites still enjoy the fundamental appeal of rooting for their own. Occasionally, this is allowed in entertainment at the nuclear family level, such as in the unsurprising surprise hit Taken, in which Liam Neeson flattens much of Paris to retrieve his daughter from Muslim pimps.

More allegorically, the urge to cheer on the home team empowers conservative anti-alien sci-fi films such as Oblivion because white Americans are allowed to fight for the whole human race. As Ronald Reagan, who understood a bit about movie logic, explained to the UN in 1987: “I occasionally think how quickly our differences worldwide would vanish if we were facing an alien threat from outside this world.”