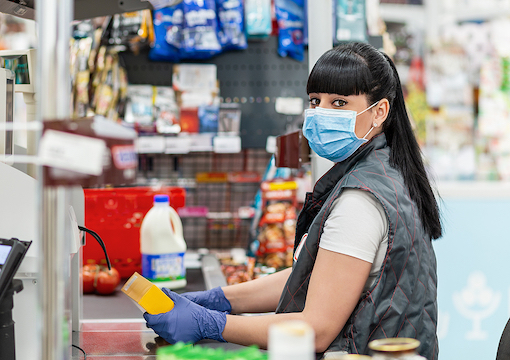 In a supermarket in France recently, I noticed that the young woman at the till wore a badge designating her as an hôtesse de caisse—a till hostess. Not long before, she had been but a humble caissière, a cashier. What a promotion! She didn’t look all that proud of it, I must say.

Deliberate and programmed changes in terminology, and in the designations of workers, are interesting in themselves and seem to occur with ever-increasing frequency. One has to keep up with them, of course, for fear of being regarded as a reactionary. What was not merely acceptable but compulsory yesterday becomes taboo today, and use of a taboo word establishes one as being not merely behind the times, but a bad person. Woe unto him who utters the words air hostess or stewardess! He is as welcome as a Tyrannosaurus rex at a vegan ashram.

It is easier to change names than things and job titles than the work actually done by those who bear them. The till hostess did precisely what the cashier did; no doubt some bright manager thought that a new title would lend dignity to the work. Probably, she will one day be promoted to till manager; there is inflation in job titles just as in everything else.

“There is inflation in job titles just as in everything else.”

Though working at a supermarket checkout is a common trope for dead-endedness, both in life and career, the job could be very interesting, at least for a time. It would be fascinating to see what people choose to buy and to try to correlate their choice with their social class, level of education, and intelligence—which are to an extent what we would now call intersectional, though of course without 100 percent correlation.

Correlation is not causation, as everyone both knows and always forgets, but I suspect that the consumption of soft drinks, for example, is highly correlated with stupidity, low income, poor educational attainment, and social class. Bearing in mind that correlation is not causation, I would not go so far as to say that the consumption of soft drinks actually causes stupidity, etc., but secretly I think that it might, especially when started early in life. Research into this question is necessary.

Naturally, no conclusions about people from what they buy can be definitive. I was once in a supermarket when I was surprised to see my professor ahead of me at the queue at the till. In the old days professors did not go shopping in supermarkets, but times had changed in accordance with advancing democracy. My professor was one of those people who, at the best of times, could make you feel uncomfortable at a distance of a hundred yards; his social awkwardness preceded him like a cold front on a weather map. He would hold out his hand for you to shake and withdraw it just as your hand reached it. Then, when you had withdrawn your own hand, he would put his hand out again. In logic, this could go on forever; but generally, both gave up after one or two more tries.

Anyway, I had just two items to pay for: some raspberries and a bottle of gin. The professor looked at my basket with only a very faint raising of his eyebrows. I could see running though his mind, however, the thought of Malnourished alcoholic, probably uses the raspberries to flavor the gin. Such a conclusion would have been very premature.

If I were on the till in a supermarket, I am sure that I couldn’t resist giving out dietary advice, mainly of the negative variety, to the customers, in particular those who bought processed food exclusively. “No,” I would say, “you don’t want this disgusting unhealthy muck, this repellent concoction, take it back to the shelf.” If the customer had a small child in tow, I would accuse her of abusing it with bad food, fattening it up like a pig and reducing its life expectancy. I would refuse on the grounds of conscience to ring up the most egregious items and would snatch them from the belt and drop them beside my chair. I don’t suppose my employment would last very long.

During the pandemic, we discovered just how important cash-till hosts and hostesses were. While we dispensed easily enough with face-to-face encounters with doctors, university professors, lawyers, etc. (in general the higher paid), we found we could not do without encounters with these previously disregarded persons. They worked heroically through the pandemic and helped to keep us in food.

I spent the first lockdown in Paris. There, the tills of my little local supermarket were staffed exclusively by ethnic-minority immigrants. Goodness knows what their lives were like! Probably they had to commute every day into the center of the city from some of the ugliest suburbs yet devised by man (the ride from Charles de Gaulle Airport into the City of Light is a vision of urban hell). Yet they always remained polite and seemingly cheerful. I should imagine they spent half their lives paying for their rent.

What was their reward for their quiet and uncomplaining heroism? Not long after the pandemic was over, or at least the more severe measures taken against it were over, they were all sacked and replaced by machines.

I am not a Luddite and can quite see that if I were the owner or manager of a supermarket, I should also employ these machines. Nevertheless, I cannot but spare a thought for these loyal women (all but one of the cashiers were women) who must have apprehended that hundreds of thousands if not millions of the middle classes were lounging about at home, claiming to work, or disappearing to their rural second homes, while they risked infection on public transport twice a day.

They were not the social-security-claiming types, and would no doubt find other employment. After all, there is no fixed number of jobs in any economy. All the same, there seemed to me something almost indecent about their sudden and unceremonious departure, as if they were disposable paper napkins used at a picnic. It is the way of the world, I know, and possibly in the long run it is all for the best, all this creative destruction. But it can’t be much fun, being creatively destroyed.