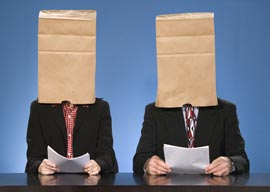 Something very morbid is going on in the press these days every time there’s an act of violence by a person who might have racial, religious, or ideological motives. If the perp is white, and if he has even the slightest connection to anything vaguely right-wing, the liberal press screams, “See? WHITE MEN are the TRUE mass killers! RIGHT-WING violence is this nation’s biggest threat.” Conversely, when the perp is a Muslim, the conservative press yells, “JIHAD IS UPON US!” before all the facts are known. In response, the liberal press vows to make an even bigger deal out of the next wacky white guy, leading the conservative press to make even more of a fuss over the next manic Muslim. It’s a derby, and it’s nice to see everyone having so much fun (except, you know, the killers” victims, but screw them, right? This is journalism!). The press is cheering these crimes like spectators at a relay race where both “teams,” let’s call them Team Crescent and Team Cracker, provide new racers each month.

Having said that, having dutifully slammed both sides for being irritatingly juvenile by creating the “hate-crime relay race,” I”ll add that there is a difference between the two journalistic factions. Generally speaking, the conservatives usually admit to having a dog in the fight. It’s hard to run a website called RightWingPatriot.com or DestroyShariah.org and still claim to be objective. Members of the liberal (“mainstream”) press, on the other hand, rarely admit bias. Their shtick is based on the fallacy that they bring you the news with no political goals and no desire to accomplish some bit of social engineering. The dishonesty of “mainstream” liberal journos makes their part in the hate-crime relay race much worse, because even though they cheer from the stands just like the conservatives, they never admit it, even if you catch them cheering.

All the same, every now and then, you can pry a revealing admission from one of them.

“Although most media observers know that mainstream journalists treat ethical guidelines as things to be invoked or jettisoned based on their whims, you rarely get them to come clean about it.”

Dylan Stableford, senior editor for Yahoo News (previously media editor at The Wrap) must have been beside himself with disappointment that the Charleston church shooter was a lone white guy with no ties to a vast far-right racist conspiracy. So, being a professional newsman, he invented a conspiracy to compensate for the fact that reality had so cruelly deprived him of one. In a June 22 Yahoo piece, he pointed a finger of blame at “Earl Holt, the leader of a white supremacist group that has been linked to suspected Charleston shooter Dylann Roof.”

Ten days later, Rick Newman, senior writer for Yahoo Finance (previously chief business correspondent for U.S. News & World Report) took Stableford’s ball and ran with it for the touchdown (because being a professional newsman, he knows it’s all about playing follow-the-leader). In a July 2 Yahoo Finance article, he wrote, “As president of a white nationalist group linked with the murders of nine churchgoers in Charleston, S.C. on June 17, Earl P. Holt III is straddling the uneasy boundary between free speech and racial hatred.”

According to Stableford and Newman, Holt and his organization (the Council of Conservative Citizens) are “linked” to both the murderer and the murders. But linked how? Was Roof a CCC member? Did Holt mentor or support him? No. Roof read some pages on the CCC website. That’s it. That’s the extent of it. There was no two-way connection. In fact, reading the relevant passage from Roof’s “manifesto,” the most he says about the CCC is that it was “the first website I came to” in his search for information about “black on white crime.” The extent of the “link” is the CCC’s Google search ranking.

I”m no defender of the CCC, but I would think that all Web journalists and site owners, left or right, would take issue with Yahoo News” assertion that if someone views a page on your site, you are now “linked” to any crimes they may commit. I ran my concerns past the Poynter Institute’s senior faculty member for broadcasting and online journalism, Al Tompkins, coauthor of the Radio and Television News Directors Foundation’s “Newsroom Ethics” workbook. A fair and nonpartisan guy, Tompkins has received a Peabody Award and the National Academy of Television Arts and Sciences’ Governors Award for his work in journalistic ethics. I asked him:

I would think that a personal link of some kind”actual contact between the perp and the organization”would be needed before the term “linked” should be used. That seems the responsible way to do it, so I”m curious about your opinion regarding the use of the term “linked” when the extent of the link is that the perp visited a website.

Yes I think you are right. As much as we might want to link bad guys with bad guys, I know of no proof that would do so. Now, if police or somebody else alleges a link, report that and ask what the “link” is. To me, a link means a connection and a connection works two ways, not just one.

Armed with that response, I emailed both Stableford and Newman. Stableford read every email I sent him (via Facebook, where one can see when an email is read), and he steadfastly refused to comment. Newman, on the other hand, was quite chatty, attempting to turn my question around on me by asking how I would have worded his original paragraph:

Ask yourself a question: If “link” isn’t the right way to describe the way the two interrelate, what is? Put yourself in the position of the person writing that story and tell me what words you would have used. Or would you simply not have done the story, deeming it irrelevant?

Thank you, Rick. I”m always happy to teach. My response:

I am very pleased to answer your question. I would have worded your paragraph thusly: “As president of a white nationalist group whose website was cited as an inspiration by the gunman who murdered nine churchgoers in Charleston, S.C. on June 17, Earl P. Holt III…” Just seven extra words; a small price to pay for accuracy!

But I haven”t given you the “money shot” yet, which came when Newman addressed the criticisms of Al Tompkins: “I”m not familiar with Al Tompkins, but he’s entitled to his opinion.” If it seems odd that a “mainstream” journalist would be unfamiliar with one of the most respected scholars at one of the most respected journalism institutes in the U.S., dig what Newman told me about the entire concept of journalistic guidelines: “This is an imperfect craft and any journalist who claims there is one true set of guidelines that apply equally to every story is a phoney.”