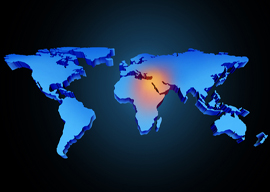 A senior Syrian government spokesman has confirmed that his nation possesses chemical weapons and might employ them against a “foreign aggressor.”

Bashar al-Assad’s embattled regime just managed to shoot itself in both feet, provide ammunition to Syria’s enemies, and give them yet another excuse to intervene in its raging civil war.

Western governments and media that have become cheerleaders for Syria’s rebels went into full trumpet mode, issuing dire warnings of Syria’s “threat of weapons of mass destruction.” Israeli and US officials warned they might have to seize Syria’s chemical arsenal lest it fall into the hands of Lebanon’s Hezbollah. Shades of Iraq and Saddam Hussein’s WMDs.

The bumbling Damascus regime was too inept to explain that Syria had acquired a limited arsenal of chemical weapons over the past twenty years to counter Israel’s tactical nuclear weapons. Western media barely mentioned this important point.

“US neoconservatives and many bellicose Republicans chant that the road to Tehran runs through Damascus.”

During the 1973 Arab-Israeli War, Moscow informed Damascus that Israel was readying tactical nuclear-armed missiles, land mines, and bombs to halt what looked like a Syrian armored breakthrough on the Golan Heights. Damascus was also targeted by Israeli nuclear weapons. Syria determined to obtain a limited deterrent to forestall any future such nuclear threats.

Syria’s arsenal of mustard, cyanide, and nerve gas is loaded into air-delivered bombs, short-range Scud or SS-21 missiles, or short-range artillery shells. Chemical weapons are mislabeled as weapons of mass destruction. They have limited killing power and are subject to weather conditions.

The Western media’s cries of alarm ignored this fact, as they ignored the point that the lightly armed Hezbollah would likely be unable to obtain or employ such weapons even if it had them and decided to risk suicide.

In the kind of urban warfare now going on in Syria, chemical weapons would have little use. Far more effective and deadly would be the thermobaric fuel-air explosives employed by Russia, US, and Israel that rip apart the lungs of soldiers fighting from cover in ruined buildings or bunkers.

Israel has the Mideast’s largest arsenal of chemical and biological weapons. Its military establishment and right-wing parties have made no secret of their yearning for revenge against Hezbollah, which inflicted a short, sharp defeat on Israel’s army in southern Lebanon in 2006. Nor have Israel’s expansionist rightists given up the ambition of former leader Ariel Sharon (who remains alive but in a deep coma) of turning Lebanon into an Israeli protectorate ruled by Maronite Christian rightists.