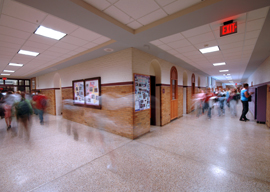 In Chicago, the kids aren”t all right.

Graduation rates within its public schools were recently downgraded after a “statistical error” overinflated the numbers. News of shootings is a near-daily occurrence. President Trump recently dispatched federal law enforcement to help clamp down on the uptick in crime.

While the Windy City wallows in violence, the graduation rate among high schoolers is improving, yet students still have a lousy chance of succeeding in college or finding a job.

Mayor Rahm Emanuel has a plan to combat the poor state of preparedness the city’s schools provide students. He unveiled the proposal a few weeks ago, calling it “Learn. Plan. Succeed.”A Degree for Life.”

What it entails is nothing short of ambitious. In order for students to graduate from Chicago public schools, they must have one of six items: a college acceptance letter, a military enlistment confirmation, acceptance into a trade apprenticeship, proof of entering a jobs-training program, acceptance into a “gap year” program, or just a plain old job offer.

“What kind of society shrugs its shoulders while its citizens waste away the most productive years of their lives?”

The new prerequisite, which is necessary on top of the normally required course work, is meant to change expectations among students. Emanuel wants high schoolers to be more forward-looking, and not just the bright ones. “Just like you do with your children, college, post”high school, that is what’s expected,” he said during a press conference unveiling the plan. “If you change expectations, it’s not hard for kids to adapt.”

Now, before you slam your keyboard and scream about socialized education, Chicago Public Schools chief education officer Janice Jackson admits that no actual diplomas will be withheld from a student who completes the required course load. What will happen is that students approaching graduation without a plan in place will be encouraged to construct one. And since Chicago community colleges pretty much accept anyone, there’s no huge hurdle to clear in order to graduate.

Yet somehow critics from both the left and right are not pleased. Jordan Weissmann of Slate is worried the policy will be a boon to “predatory, for-profit colleges.” Amy Alexander at NPR believes adding another graduation requirement to Chicago’s struggling minority student population doesn”t help, and only hurts their already bleak prospects.

Scott Shackford of the libertarian Reason magazine thinks the proposal doesn”t leave enough room for entrepreneurial-minded students who want to bypass traditional work and college altogether. “Personal entrepreneurship is not an option. If your kid is a wunderkind in crafts or 3D printing and is making bank on Etsy, that doesn”t satisfy the Chicago school system. Will administrators see private contract work as a “job” under this system?” he asks.

Yes, because if there’s anything a poor black Chicago teenager is doing in his free time, it’s crafting 3D-printed gewgaws and hawking them on Etsy! They definitely aren”t imitating the filth and hooliganism witnessed on World Star Hip Hop.

The most blistering attack on Emanuel’s plan comes from Katherine Timpf of National Review. Conservative opposition to the Rahm plan was expected, but Timpf’s objection is an example of why ideology is often a bogus excuse for practicality. She writes, “So”is Mayor Emanuel right? Is it better to have your next steps planned out before you graduate high school? The answer: it doesn”t matter because it’s none of his f*&#@&$ business.”

Timpf goes on to say that in America we are supposed to have “the freedom to not live up to our potential if we don”t feel like it.” And just to reiterate her slacker point, Timpf declares that if a “high-school graduate wants to sit in his grandma’s basement for a few years and watch cartoons,” that is perfectly okay as long as “Grandma says that’s cool.”

For Timpf and her fellow right-wingers, centralized coordination of young people’s lives stinks of authoritarianism. Kids should be free to drop out, experiment with varying modes of living, and discover their way to self-sufficiency. And if it means newly minted adults can perpetuate their adolescence from the comforts of their living room couch, so be it.

That might be freedom, but what kind of society shrugs its shoulders while its citizens waste away the most productive years of their lives?

The problems with modern public schools are numerous. Bad teachers aren”t fired because of union protection, good ones are sucker punched by unruly students, our national standards make a mockery of classical math, and classrooms even become morally depraved cages of licentiousness.