Chicago on the Potomac 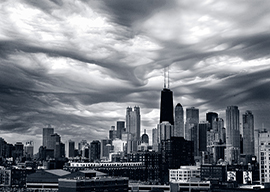 No matter how you rearrange President Obama’s inner circle, it still looks, smells and tastes like a rotten Chicago deep-dish pizza.

The White House is reportedly looking to manufacture a “pro-business” aura with Bill Daley, who holds a “corporate responsibility” executive office at J.P. Morgan and once headed the U.S. Chamber of Commerce—the latter, a left-wing hate object and Obama punching bag leading up to the midterms.

But the Beltway-based Chamber of Commerce is too often a fair-weather statist lobbying organization. It supported the TARP all-purpose bailout, the auto bailout and the bottomless, pork-filled stimulus package, all of which have forcibly redistributed money from taxpayers and small businesses to politically connected special interests (including Daley’s J.P. Morgan, which was most recently swept up in a massive pay-to-play bond scheme in Alabama).

“Like the Richard Daley machine in Chicago, Fannie Mae in Washington has served as an industrial-sized patronage factory—sharing profits with political allies, spreading taxpayer funds to ethnic groups, and doling out jobs to left-wing academics, Washington has-beens and back-scratching buddies.”

Daley has about as much real experience creating jobs as Da Boss now sitting at 1600 Pennsylvania Ave—which is to say, less than a thimble full. (It’s a New Year. I’m being generous.) In 2009, the head of Chicago’s sanitation department implicated Daley in a hiring corruption scheme tied to his brother’s mayoral administration. The official was convicted; Daley shrugged off the federal probe. “Even if it happened—and I’m not saying it did—things were different. There was nothing illegal about that stuff.”

Instead of distancing himself from the favor-trading Wall Street fat cats who have earned the ire of both anti-bailout tea party activists and anti-corporate liberals, Obama remains wedded, embedded and indebted to the worst kind.

Daley has served on the board of government-sponsored financial behemoth Fannie Mae since 1993. Like the Richard Daley machine in Chicago, Fannie Mae in Washington has served as an industrial-sized patronage factory—sharing profits with political allies, spreading taxpayer funds to ethnic groups, and doling out jobs to left-wing academics, Washington has-beens and back-scratching buddies. Like Daley. And close Obama adviser Jim Johnson, the Fannie Mae exec who got sweetheart loans from shady subprime lender Countrywide.