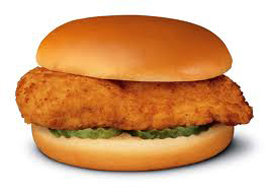 Fast-food franchise Chick-fil-A, known for its juicy chicken sandwich, has come under attack. Franchise head Dan Cathy made public statements in support of traditional marriage and has philanthropic connections to such alleged hate groups as Focus on the Family and the Fellowship of Christian Athletes.

Although Cathy and his staff have affirmed their determination “to treat every person with honor, dignity and respect”regardless of their belief, race, creed, sexual orientation or gender,” this statement, which reads like something from the Department of Education, is apparently a ruse. According to gay-advocacy organizations The Huffington Post and The New York Times, as well as leading Democratic pols such as Chicago Mayor Rahm Emanuel and Boston Mayor Thomas Menino, Cathy is trying to stamp out (you guessed it!) “tolerance.” Every time someone bites into one of his sandwiches, the customer promotes hate. Presumably if one bites twice, one gets cholesterol poisoning and causes a recurrence of Auschwitz.

“Things aren”t looking up for the warriors against Christian bigotry because most of the opposition has now melted into putty.”

I feel sorry for the multicultural left, which has triumphed so completely in the Western world that it doesn”t have any real enemies to fight anymore. Can one really take organizations such as Focus on the Family, which advocates heterosexual marriage, as a grave neo-fascist threat? Things aren”t looking up for the warriors against Christian bigotry because most of the opposition has now melted into putty. The only thing progressives can do these days is portray quasi-wimps such as Cathy as would-be Grand Inquisitors, even though he runs around oozing affection for the left’s protected classes.

Even more depressing from the standpoint of left-wing activists, the authorized “conservative” opposition concedes most of the left’s case before registering its tepid objection. The emphatically Republican editorial in our paper warned against new outbreaks of “religious intolerance” coming from gay activists. One might think that Rahm Emanuel was behaving like some crazed Christian fanatic during the Age of Religious Wars.

On Fox, GOP fixtures Bill O”Reilly and Laura Ingraham expressed concern that the liberal media was going after Chick-fil-A unfairly and that Chicago and Boston’s mayors were pulling out all stops to keep the franchise from crossing into their antiseptically leftist municipalities. According to Bill and Laura, this grim offensive was entirely uncalled for, because there was nothing to suggest that Chick-fil-A’s staff treated gay customers badly. In fact, Cathy was now going out of his way to hire gay workers as part of his outreach. Bill noted that Cathy, had he been asked, would have catered Barney Frank’s gay wedding.