Children of the Mob 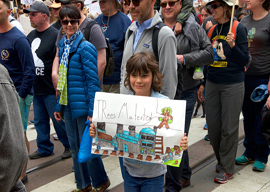 It was a beautiful day in Paris for a demonstration, brilliantly sunny and not too hot, and the crowds were out: obviously bourgeois, prosperous, well-behaved, and not at all multiracial or even multicultural. It was a march for the climate, as though the climate were an oppressed person wrongly imprisoned by a distant dictatorship. Such nice, good, well-intentioned people! I found it all terribly depressing.

The organizers estimated the crowd at 50,000, the police at 18,500. I did not actually attend it, my taste for clichéd speeches interspersed with snatches of popular music being very limited. But I watched the crowds on their way to the demonstration, mostly with beatific expressions on their faces, as if aware that they were doing something really good like feeding the hungry or healing the sick. They were both saving the planet and amusing themselves on a Saturday afternoon.

They had banners. One of them read:

Only people who had lived all their lives in a state of the utmost comfort and security (try that slogan in Rwanda or Cambodia, for example) and who had hardly ever suffered fright, let alone terror, could have held up such a banner and believed that it really meant what it said. Terror for them was a distant prospect enjoyable to contemplate, as in a disaster movie, rather than something that was within their own experience.

I was particularly appalled that there were so many young children among the demonstrators (if you can call them that). It was not that the demonstration was likely to turn nasty, with police baton charges or anything like that. The parents were not exposing their young offspring to physical danger, such as being crushed to death by fleeing crowds. No, what horrified me was that they were willing, by giving them small banners to hold up, to turn their own children into an instrument of an ideology whose meaning or connotation they could not possibly understand.

Who uses children in this way? Of course, politicians have long liked to surround themselves with children to prove that they (the politicians) are human just like everyone else. How can a man who likes children be bad, pace W.C. Fields? He must have a good heart. Hitler and Stalin were often pictured receiving bouquets of flowers from little children, especially blond girls. Flowers + little girl = goodness of recipient.

“I want children to grow up so that they can think for themselves.”

In a like manner, a child at a demonstration, especially one so well-behaved as this, must be espousing a good case, for children are too innocent to lie, and out of the mouths of babes and sucklings emerges only truth. The children, by the way, looked almost as pleased with themselves as their parents, who were very pleased indeed.

I didn’t actually do the experiment, but I daresay that had I asked the children why they were at the demonstration they would have been able, like performing monkeys, to say something about saving the planet, making it safe for the whales, dolphins, and pandas, for example.

I hope it goes without saying that I have nothing against the whales, dolphins, and pandas, in fact I much prefer a world in which there are such creatures. (I am not so sure about Ascaris lumbricoides, the absolutely disgusting, large white roundworm that parasitizes the human intestine, sometimes in large numbers, and emerges through various orifices, but I will let this pass; nor am I sure about the use of fluffy pandas on the ends of carpet slippers or for tea cozies, but that is another matter completely.)

I think the destruction of the environment and pollution are very serious problems. No one who has been to Peking or Delhi could possibly deny it. Comparatively late in my life, much later in fact than it should have been, I have come to see public transport as one of the most important keys to the quality of life in cities; and this is so even for those who can afford to be chauffeured everywhere in luxury limousines.

What I object to is the indoctrination of children on contentious political matters. I am all for indoctrinating children so that they are polite and respectful to their elders, eschew pop music, do not chew gum, drop litter, or send text messages to their friends in restaurants, and so forth. But filling their minds with ill-digested slogans, from which they never recover their ability to think independently, seems to me altogether different. I do not want them to be indoctrinated even with things that I happen to consider right or correct. I want children to grow up so that they can think for themselves.

My impression is that our children have become increasingly like children who have been to madrassas, except that what they have been taught is not the Koran, but a vulgate of political correctness. Again, it is not that I want them to be taught the opposite; we should not fall for the easy assumption that if some point of view is politically correct, then its opposite must be the truth. Rather, I would like children not to have attended or been subjected to any kind of madrassa, parental or otherwise.

When I talk to young people (I mean young people of the middle class, of course), I have increasingly the impression that they have been brainwashed, and that some thoughts are simply beyond the range of their neuronal possibilities. Admittedly, my impression does not count as scientific evidence; I have not conducted anything like a Gallup poll, and my sample may possibly be unrepresentative of everything, or representative of nothing. But when I say to the young people whom I meet that I am uncertain about global warming—I acknowledge my ignorance and lack of qualification on this subject—they react as I presume people would if, in Mecca, I denied the existence of God and alluded to the less attractive characteristics of Muhammad even as depicted by early Muslims.

The evident smugness of the marchers for the climate revolted me. They thought themselves so virtuous! I wanted to tell them that, by reducing their children’s later capacity for independent thought, they were guilty of child abuse. Then I remembered that that was exactly what Richard Dawkins had said about those parents who bring up children in any religious belief whatever, a statement that appalled me. I will have to refine my thoughts, which is always a painful thing to have to do.