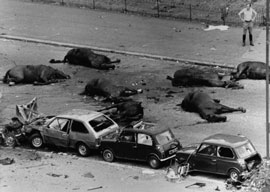 One summer’s day 32 years ago, during a spell of employment at the U.K. offices of Marathon Oil Corp. in London’s Marylebone Road, I was taking lunch at a nondescript greasy spoon near those offices when from the near distance there came an almighty THUD.

Startled, I looked across at the proprietor of the place, who was standing at his counter organizing some silverware.

He, not even bothering to look up from his forks: “Oh, an IRA bomb.”

This one wasn”t actually as tough as I at first took him to be. He knew a thing I did not know: that a couple of hours earlier, while I had been absorbed in coding up an inventory management system for Marathon’s North Sea oil rigs (Yes! I was once gainfully employed in useful work!), a bomb had gone off in Hyde Park, killing or mutilating several troopers of the Household Cavalry and their horses. At that time and place, when Britain had not yet been sufficiently enriched by mass Muslim immigration, “bomb” was synonymous with “IRA bomb.”

“Adams is a specimen of a type that showed up several times in the 20th century: the terrorist boss who was allowed, by general grudging consent, to graduate to suit-and-tie politics on condition he use his authority to stand down the assassins under his command.”

The THUD that I had heard was the “two” of the old one-two. A second bomb had gone off under the bandstand in nearby Regents Park while a military band was playing to a lunchtime crowd. The audience, mostly young mothers with preschoolers, was showered with fragments of bandstand and bandsmen.

That was the closest I got in person to the Northern Ireland Troubles of 1966-1998, unless you count drinking sessions at a pub I”d frequented the previous year whose clientele included soldiers from a nearby British Army barracks. The squaddies had done a tour of duty in Northern Ireland and come home loathing the place and all its inhabitants, without discrimination.

My comparative detachment from the Troubles has not, of course, prevented me from bloviating on the subject: see numerous pieces here.

If you”d prefer close-up first-hand accounts of the Troubles, I recommend Jonathan Stevenson’s We Wrecked the Place and”for those with strong stomachs”Kevin Myers” Watching the Door. For 1,648 pages of raw facts, including a 22-page statistical appendix analyzing killers and victims by date, place, and allegiance, get Lost Lives. Or if boob bait for Irish-American bubbas is what you”re wanting, Tim Pat Coogan is yer man.

With this as background, you can imagine what a happy smile crossed my face on hearing that terrorist gang leader Gerry Adams had been arrested and questioned about a murder gruesome and heartless even by the dismal standards of the Troubles.

The smile soon faded as I reflected that there is not the least possibility Adams will do any jail time for having ordered that killing, nor for any of the innumerable other crimes he is undoubtedly guilty of.

Reflecting further, I concluded that, from a coldly utilitarian point of view, not only will Adams not be prosecuted by the authorities in Britain or Ireland (it is a statistical near-certainty”see Lost Lives“that some of the murders ordered and/or committed by Adams took place in the Irish Republic), but that he should not be.

It was at that point that I headed for the liquor cabinet. What a fallen world we live in!

Statecraft ain”t beanbag. It ain”t even hurling, Gaelic Ireland’s version of mixed martial arts, with clubs. Adams is a specimen of a type that showed up several times in the 20th century: the terrorist boss who was allowed, by general grudging consent, to graduate to suit-and-tie politics on condition he use his authority to stand down the assassins under his command. Following Adams” arrest, his indignant supporters compared him to Nelson Mandela. Well, yes.

As the protests by those supporters illustrate, and as his vote counts in British and Irish elections further illustrate, Adams is a hero to His People.