Chimp Bites Woman, Talks About It 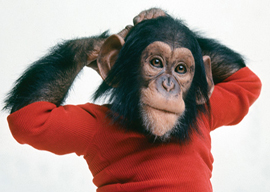 Project Nim is a critically praised documentary about Nim Chimpsky, a chimpanzee who was the subject of one of those attempts to teach American Sign Language to an ape, a fad that once fascinated the popular imagination.

Directed by James Marsh, who won an Oscar for his 2008 documentary Man on Wire about another 1970s phenomenon—the French tightrope-walker who strolled from one World Trade Center tower to the other—Project Nim turns out to be an engaging, entertaining, manipulative, and characteristically lowbrow animal-rights polemic. Project Nim’s never-quite-articulated message is that chimpanzees should have been left in Africa. Perhaps, but there’s much this movie ignores.

Like the liberal college professor played by Ronald Reagan in Bedtime for Bonzo who raises a chimp like a child to show that nurture overrules nature, Columbia U. psychologist Herbert Terrace (Marsh’s designated villain) bought a baby male chimp in 1973 to prove Noam Chomsky wrong.

The MIT linguist (more widely known as a critic of American foreign policy) had interjected himself into the ancient philosophical arguments over human nature and language’s origins. Chomsky pointed out that the remarkable speed with which young children learn to create novel and complex sentences suggests that syntactical language isn’t just monkey see, monkey do. Instead, Chomsky argued, humans have an innate and unique capability for generating new well-formed sentences.

Terrace delegated the satirically named Nim Chimpsky to one of his grad students (and former girlfriends), a “rich hippie,” to raise in her Upper West Side brownstone alongside her three children and her new husband’s four kids. ABC wanted to make a heartwarming, Brady Bunch-style sitcom about this ménage. But Nim felt that eight is enough and set about driving off his new mother’s mate with vandalism and violence. She sided with Nim, and divorce ensued.

Terrace moved Nim to a posh 28-acre estate in Riverdale, where better-organized students (one of whom Terrace slept with) tried to teach him ASL. He learned, by their initial count, 125 words.

Yet as Chomsky’s former protégé Steven Pinker wrote in his 1994 bestseller, The Language Instinct:

Jane Goodall, visiting the project, remarked…that every one of Nim’s so-called signs was familiar to her from her observations of chimps in the wild. The chimps were relying heavily on the gestures in their natural repertoire, rather than learning true arbitrary ASL signs.…

Moreover, the decisive test was not whether Nim could grasp individual signs, but whether he could create new sentences using signs in different fashions. For example, “Dog bites man” is not “Man bites dog.”

Unfortunately, “Chimp bites woman” became common as the growing chimp’s chimp-outs became terrifyingly vicious. After he ripped half the face off one young lady, he was dispatched back to a cage at a U. of Oklahoma chimp-breeding farm. There, Nim became friends with a Deadhead graduate student who shared many a joint with him.

In the most intriguing interview, another Sooner claims that Nim wasn’t interested in learning any highfalutin language. Instead, she asserts, he was most content when assigned honest work cleaning cages. (Nim is briefly shown sweeping and hosing, but this somewhat implausible assertion is dropped.)