China, Not Russia, the Greater Threat 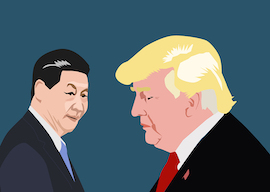 Ten weeks of protests, some huge, a few violent, culminated Monday with a shutdown of the Hong Kong airport.

Ominously, Beijing described the violent weekend demonstrations as “deranged” acts that are “the first signs of terrorism,” and vowed a merciless crackdown on the perpetrators.

China is being pushed toward a decision it does not want to make: to use military force, as in Tiananmen Square 30 years ago, to crush the uprising.For that would reveal the character of President Xi Jinping’s Communist dictatorship, as well as Beijing’s long-term plans for this semi-autonomous city of almost 7.5 million.

Yet this is not the only internal or border concern of Xi’s regime.

Millions of Muslim Uighurs in China’s west are in concentration camps undergoing “re-education” to change their way of thinking on loyalty, secession and the creation of a new East Turkestan.

In June, a Chinese vessel rammed and sank a Philippine fishing boat, leaving its 22 crewmen to drown. The fishermen were rescued by a Vietnamese boat.

President Rodrigo Duterte’s reluctance to resist China’s fortification in the South China Sea of the rocks and reefs Manila claims are within its own territorial waters has turned Philippine nationalism anti-China.

“The big loser in this confrontation, if we stay the course, will not be the USA.”

China’s claim to Taiwan is being defied by Taipei, which just bought $2.2 billion in U.S. military equipment including Abrams tanks and Stinger missiles.

Any Taiwanese declaration of independence, China has warned, means war.

While Taiwan’s request to buy U.S. F-16s has not yet been approved, in a rare visit, Taiwan’s President Tsai Ing-wen stopped over in the U.S. recently, before traveling on to Caribbean countries that retain diplomatic relations with Taipei. Beijing has expressed its outrage at the U.S. arms sales and Tsai’s unofficial visit.

The vaunted Chinese economy is growing, at best, at half the double-digit rate of a decade ago, not enough to create the jobs needed for hundreds of millions in the countryside seeking work.

And talks have been suspended in the U.S.-China trade dispute, at the heart of which, says White House aide Peter Navarro, are Beijing’s “seven deadly sins” in dealing with the United States:

China steals our intellectual property via cybertheft, forces U.S. companies in China to transfer technology, hacks our computers, dumps into our markets to put U.S. companies out of business, subsidizes state-owned enterprises to compete with U.S. firms, manipulates its currency, and, despite our protests, ships to the USA the fentanyl drug that has become a major killer of Americans.

Such practices have enabled China to run up annual trade surpluses of $300 billion to $400 billion at our expense, and, says Navarro, have caused the loss of 70,000 factories and 5 million manufacturing jobs in the U.S.

Moreover, China has used the accumulated wealth of its huge trade surpluses to finance its drive for hegemony in Asia and beyond.

With President Donald Trump threatening 10% tariffs on $300 billion more in Chinese exports to the U.S., Xi must decide if he is willing to end his trade-war tactics against the U.S., which have gone on during the Clinton, Bush and Obama administrations. If he refuses, will he accept the de-coupling of our two economies?

Only Trump has taken on the Middle Kingdom.

If the American people and Congress are willing to play hardball and accept sacrifices, we can win this face-off. The U.S. buys five times as much from China as we sell to China. The big loser in this confrontation, if we stay the course, will not be the USA.

For three years, the U.S. establishment has not ceased to howl about Russia’s theft of emails of the DNC and Hillary Clinton campaign.

Yet the greatest cybercrime of the century was Beijing’s theft in 2014 of the personnel files of 22 million applicants and employees of the U.S. government, many of them holding top-secret clearances.

Compromised by this theft, said then FBI Director James Comey, was a “treasure trove of information about everybody who has worked for, tried to work for, or works for the United States government.”

“A very big deal from a national security … and counterintelligence perspective,” said Comey. And Xi’s China, not Putin’s Russia, committed the crime. Yet America’s elites appear to have forgotten this far graver act of cyberaggresion.

Undeniably, Russia is a rival. But Putin’s economy is the size of Italy’s while China’s economy challenges our own. And China’s population is 10 times that of Russia, and four times that of the USA.

Manifestly, China is the greater menace.

Are Americans willing to make the necessary sacrifices to force China to abide by the rules of reciprocal trade?

Or will Trump be forced by political realities to accept the long-term and ruinous relationship we have followed since granting China permanent MFN status in 2001?

This issue is likely to decide the destiny of our relations and the future of Asia, if not the world.