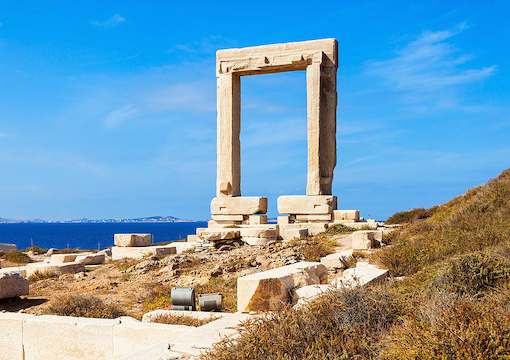 CORONIS—I suppose there’s always a first time, and looking back it was bound to happen. I scrambled off a sailing boat and took the coward’s way out after being bashed about by an angry Poseidon and a furious Aeolus. Actually it was the wife who couldn’t take it anymore and I simply went along. Sixty years of being thrown around while giving the middle finger to Aeolus and Poseidon, and during the week of another disaster, my birthday, I threw in the towel and was driven to Coronis.

A deep barometric low caused winds of 30 kilometers and more with gusts of 11 to 12 on the Beaufort. My captain is somewhat of a history buff and compared the storm to the one that wiped out the Anglo-French fleet in Crimea back in 1854. The Brits and Frogs were there in cahoots with the Turks against the Russians, of course. The Brits lost 21 ships and the French 16. The Russians, who suffered fewer lost ships, cheered the destruction of their opponents’ fleet, and Tsar Nicholas thanked the storm in an Orthodox service. Nineteen days previously, on Oct. 25, 1854, 600 brave horsemen charged the Russian guns, and this time the Russkies did not need any help from Mother Nature; Raglan, Lucan, Cardigan, and Nolan took care of that.

“In Naxos, where Zeus was given his power, allowing him to rule Olympus, my granddaughter used all her powers of persuasion to get dropped off.”

The good thing about sailing on hard seas is the discomfort of it, the one that separates the men from the girls, and the fact that when one’s sailing one automatically acts like a man. One is polite, gracious, and always ready to risk when a fellow sailor is in trouble. These traits are unnatural in today’s me-me-me world. Mind you, it’s thrilling when you’re getting smashed by the waves and can see the squall to windward and the bow is rising and rising and then it stands still for a millisecond and then plunges and while it’s plunging you think you’ll never come up again but then you do and it starts all over again. Those in the cabins below suffered the most, and after 10 hours of torture Alexandra threw in the towel of shame and surrender and the two of us walked off like Saudi and Kuwaiti military heroes.

The Cyclades were the worst part as far as roughness was concerned. According to Greek myth, these isles were once beautiful ocean nymphs, turned to stone when they provoked Poseidon’s rage. He was again in a rage, although I’ve no idea what caused his latest nervous breakdown as the Taki family sailed west. In nearby Naxos, where Zeus was given his power, allowing him to rule Olympus, my granddaughter used all her powers of persuasion to get dropped off: “Pappou, I’ve had enough. If you wish to drown it’s okay, you’ve lived a long life. I’m only 14.” Her prayers were answered in Paros, where she got off with her dad. Alexandra’s turn to quit came a few hours later when we reached Serifos.

Apollonian harmony followed upon reaching Coronis, the most perfect private isle in the Greek archipelago, in fact in any of the seven seas. I joined my host and hostess for lunch, and then the most magnificent sailboat arrived disgorging Edward and Lulu Hutley, Count and Countess Leopold von Bismarck, Sir Bob and Lady Geldof, and its owner, the great Queen drummer and probably the only reason the group still exists, Roger Taylor. We are all here because it’s Pugs Club week, except that our president, Prince Pavlos of Greece, is up in Scotland slaughtering grouse. Sir Bob hinted at a coup, but I declined to even discuss it. We don’t overthrow our Duce just because of an absence. And we don’t wish to look like a Truss-Sunak cockfight, whose consequences are going to turn Great Britain into Tiny Britain sooner rather than later. Pugs is the world’s most exclusive club and getting more exclusive by the year as two Gettys have lost interest, Romeo Arki has moved out west, and the man in the white suit has visited three of our most valued founder members.

Never mind. Rock and Roll, Roger’s new sailing boat, is very tough, of a great size, and beautifully kept inside and out by a real first-class captain and crew. As I’ve always insisted, you can tell a man by his boat even easier than by his woman, and judging by Rock and Roll, Roger is a first-class fellow and then some. Roger also has a great voice and could have made it big on that alone, but chose the drums, and we got to hear him on a video taken by Ed Hutley that left us open-mouthed with admiration. Of all the great times I’ve spent in Coronis over the past 50 years, this was the merriest, with Bob Geldof at his wittiest, questioning certain privileges we Greeks take for granted, such as having rich fathers, for example. I’m no masochist, but I hold Bob to Hemingway standards. Papa challenged people all the time and could smell a phony from afar. Bob is a musical Papa instead of a scribbling one, and he now sports a white beard like my idol.

Throughout my stay here I’ve had a feeling of “fin de saison,” and the wonderful birthday my hosts gave me added to it (a cake with sugared pics of my book, doing karate, even a blonde). Papa defined courage as grace under pressure. There were some pretty courageous people on the island.