Chris Matthews: A Tingle Inside the Skull 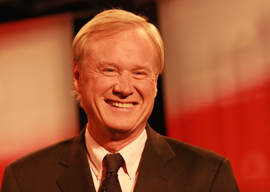 I’m notoriously mean-spirited, so please believe me: When I say I think Chris Matthews has a brain tumor, I am trying to be charitable.

The MSNBC mouthpiece’s show is called Hardball, but Oddball would be more apropos. Matthews’s flaky on-air comments are a matter of public record, with that “thrill going up my leg” thing only the most notorious.

I dearly hope a Charles Whitman-type autopsy someday reveals that Matthews’s obnoxious manner and twisted worldview were the tragic side effects of a hideous growth the approximate mass of a Titleist. The alternative—that he thinks and speaks as he does of his own free will—is almost too depressing to contemplate.

So are plenty of things. For media liberals such as Matthews, that includes last week’s sordid revelations by former JFK White House intern Mimi Alford.

The two biggest takeaways from Alford’s memoir are also its two biggest teases: She claims the president a) took her virginity; and b) pressured her to perform oral sex on special assistant Dave Powers. (If you’re a pig like me, you’re still left wondering: a) Well, did it hurt?; and b) What? You aren’t going to tell us how you picked up that particular skill? We don’t get to imagine Kennedy explaining with a wry chuckle, “No, dear, you don’t actually blow on it!” in that oh-so-familiar accent?)

Chris Matthews obviously believes that based upon his ethnic background, political bent, and obvious all-around wonderfulness, he’d have been one of JFK’s lucky male courtiers, too, if only he hadn’t been born too late. Matthews has cursed his fate and nursed his Kennedy crush his entire life, most recently coming out with an embarrassing hardcover Tiger Beat mash note to the dead president that was practically dripping with Astroglide (and inadvertently gave us this sadly funny video of oblivious, obsolete old men making fools of themselves).

That JFK was a lying, drug-addled male slut is yesterday’s fish wrap as far as average, ordinary, grown-up people are concerned. But willfully naive elite sophisticates such as Matthews felt obliged to scramble like Clint Hill on the trunk of a Lincoln to put the president’s Humpty Dumpty reputation back together again now that “pimp” is the newest unflattering adjective to affix itself like a barnacle upon the once majestic SS John Fitzgerald Kennedy.

Matthews acquitted himself about as well as can be expected for a man in his unfortunate condition. Others have no excuse.