Christian Rout in the Culture War 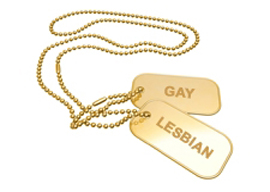 A Democratic Congress, discharged by the voters on Nov. 2, has as one of its last official acts, imposed its San Francisco values on the armed forces of the United States.

“Don’t ask, don’t tell” is to be repealed. Open homosexuals are to be welcomed with open arms in all branches of the armed services.

Let us hope this works out better for the Marine Corps than it did for the Catholic Church.

Why are we undertaking this social experiment with the finest military on earth? Does justice demand it? Was there a national clamor for it?

No. It is being imposed from above by people, few of whom have ever served or seen combat, but all of whom are aware of the power of the homosexual rights lobby. This is a political payoff, at the expense of our military, to a militant minority inside the Democratic Party that is demanding this as the price of that special interest’s financial and political support.

Among the soldiers most opposed to bringing open homosexuals into the ranks are combat veterans, who warn that this will create grave problems of unit cohesion and morale.

One Marine commandant after another asked Congress to consider the issue from a single standpoint:

Will the admission of gay men into barracks at Pendleton and Parris Island enhance the fighting effectiveness of the Corps?

Common sense suggests that the opposite is the almost certain result.

Can anyone believe that mixing small-town and rural 18-, 19- and 20-year-old Christian kids, aspiring Marines, in with men sexually attracted to them is not going to cause hellish problems?

“What was criminal vice in the 1950s—homosexuality and abortion—is not only constitutionally protected, but a mark of social progress.”

The Marines have been sacrificed by the Democratic Party and Barack Obama to the homosexual lobby, with the collusion of no fewer than eight Republican senators.

This is a victory in the culture war for the new morality of the social revolution of the 1960s and a defeat for traditional Judeo-Christian values. For only in secularist ideology is it an article of faith that all sexual relations are morally equal and that to declare homosexual acts immoral is bigotry.

But while this new morality may be orthodoxy among our elites in the academy, media, culture and the arts, Middle America has never signed on and still regards homosexuality as an aberrant lifestyle, both socially and spiritually ruinous.

To these folks, homosexuality is associated with a high incidence of disease, HIV/AIDS, early death, cultural decadence and civilizational decline. And no sensitivity training at Camp Lejeune is going to change that.

Behind these traditionalist beliefs lie the primary sources of moral authority for traditionalist America: the Old and New Testaments, Christian doctrine, natural law. Thomas Jefferson believed homosexuality should be treated with the same severity as rape.