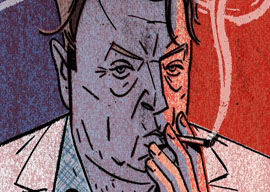 The recent study that showed atheists know more about religion than believers says tomes about the whole debate. Christians aren”t in it for the details. They”re in it for the good vibes.

So why, pray tell, is a mammoth intellectual such as Christopher Hitchens wasting his last days wrestling a straw man such as Jesus? I understand if he’s condemning Islam’s misogyny or mocking our love of Israel, and I get that the Catholic Church is literally a pain in the ass (at least for some altar boys), but the rest of America’s Christians, all 171 million of them, are only in it for the platitudes.

Hitchens is throwing a middle-American family tradition in the ring with a Tyrannosaurus Rex. Most Christians don”t think about dinosaurs. I asked Tammy Faye Bakker’s son Jay how old dinosaurs were, and he looked at me like he”d never heard the question before. After rubbing his beard for a minute, he mentioned some biblical passage that had giant lizards in it and added, “but I”m not sure.” Jay runs his own church now that includes homosexuals and dinosaurs and has followers ranging from the very literal to some who barely admit there’s a God. People go to his church for a sense of community and family. That’s why most people go to church. Though religion has a lot to answer for, going to church in this country is really just “mom’s revenge” where she gets everyone to dress smart, sit still, and listen to someone say something nice for a change. They call them “motherhood statements” for a reason. To have Hitchens scream “A-HA!” and tear it apart like it’s the year 1305 again is tantamount to shoving a world map into a kid’s face and saying, “There is no way in hell Santa could do all that!”

Approximately everyone in Iceland believes in gnomes. Let’s send Daniel Dennett over there to explain the improbability of ever finding their tiny bones. The Native American Church accepts Jesus and often features his image in their ceremonial halls. Let’s get Sam Harris to remind the Indians that missionaries brainwashed them into fitting the messiah into their faith. Virtually every female on the planet accepts astrology. Let’s get Richard Dawkins to tell us how illogical it is. Oh wait, he already did. Why are so many of our intellectuals wasting their brain cells on party pooping?