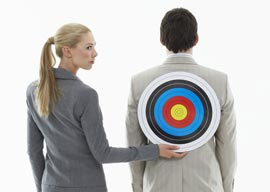 Since when did sexual harassment become the go-to reaction of women in the workplace?

According to Kim Elsesser, author of the new book Sex and the Office, the widespread fear of sexual-harassment suits has made it nearly impossible for men and women to work together in a professional setting. The shrill voices in our media-entertainment complex have convinced the country that females are perpetual victims, lorded over by sex-obsessed alpha males. False narratives about a rape epidemic on college campuses have only fueled this womanly fire.

Men have resorted to actively separating themselves from awkward situations with females in the office. They refuse to have closed-door meetings without a witness present. Comments on a co-worker’s dress choice are off-limits, lest they be construed as a come-on. It’s gotten to the point where a guy can”t even open the door for his feminine co-worker without engendering feelings of inferiority.

“The feminist mission was never about equality. Instead, it was the pursuit of power.”

Since big business follows culture, much of the blame for dysfunctional workplaces can be heaped upon companies themselves. Sexual-harassment training has been implemented at many large corporations, and even the most minute charges are investigated. Office managers, at the behest of indignant feminists, have sold out their male employees in the name of Ã©galitÃ©. This equality is only equal in the Orwellian sense, though, in that it grants far more power to the fairer gender than to men.

Of course, that has been the point of feminism all along. The mission was never about equality. Instead, it was the pursuit of power. The age-old rule of men ruling over households, workplaces, and society at large was to be wiped out.

The epidemic of sex-based lawsuits didn”t happen overnight. Like most social change, it was the result of a gradual but persistent series of arguments used by a few radical devotees to the cause. It’s one thing to point to a few pushy, licentious jerk-offs and damn all men for their behavior. But now, if you”re a guy, everything you do in the office can be perceived as sexist.

According to the sassy female empowerists at Jezebel, you can be sexist in the workplace and not even know it by doing the following things: acting surprised that a female co-worker follows sports, requesting that overconfidence be turned down a notch, asking the woman receptionist if she knows how to fix the copier, just having a female receptionist in general. And let’s not forget The Washington Post‘s recent analysis on whether air-conditioning makes women cold in their cubicles to freeze in place the patriarchy. I”d call the macho AC conspiracy a “hot take” if it didn”t come off as sexualizing a girls-only problem.

These complaints might all seem trivial (and insane), but they add up. Nagging protests have the ability to snowball until they become a coherent message. By constantly hammering away at the idea that men are incorrigible Neanderthals with their brains set on “rape,” feminists have altered corporate culture so that guys must be on guard every second of the day. If they slip up, it’s a one-way trip to the unemployment line.