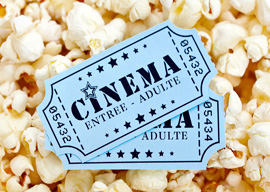 Paris is by far the best city in the world for cinema. At least, it is the best city known to me; perhaps Irkutsk or Conakry are better, though I rather doubt it. You could see two or three interesting films a day in Paris for the rest of your life, if you had the time and energy (in fact, I once tried the experiment for a week, and it worked).

By interesting films, I mean, naturally enough, the type of films that interest me. To judge by the size of the audience that attends them, however, not many people share my interests. Such films, from places like Albania or Guinea-Bissau that one does not normally associate with filmmaking, are often screened for a single showing in one of the myriad small cinemas of the city, at 11 or even 9 o’clock in the morning. You have to be both retired and enthusiastic to catch them.

Anywhere else, people who go to the cinema at 11 o’clock in the morning are the homeless who manage to sneak in via the fire exit, or other strange people. In Paris, they are intellectuals who discourse learnedly not so much on films, as on film, which is something else entirely. Films are to film as butterflies are to lepidoptery.

“We are all of us against subsidies, except for those subsidies from which we ourselves benefit.”

In England years ago I would sometimes go to an art cinema where a large proportion of the audience (always tiny) seemed to be composed of escapees from institutions for the criminally insane. Once when I was writing a series of articles about strange resorts of entertainment, I went there with my wife to see a film called Necrophilia. At least one could not have accused the title of misleading the public as to the subject matter of the film. It had been made in Canada with a subvention from the Canadian government, which was no doubt doing its bit to remove the burdensome stigma under which necrophiliacs (who, after all, harm no one) live. And this was before the country became known far and wide for its promotion of political correctness.

We were the only persons in the cinema until a middle-aged man in a dirty raincoat—I apologize if I am stereotyping, but reality is reality—came in and, though the rest of the cinema was of course empty, chose a seat right next to ours. When the title of the film scrolled up, he exhaled a sigh: Ahhhh, necrophilia! My wife lasted about three minutes of the film, I lasted five. One can watch only very little sex carried out in a morgue.

One of the great advantages of small cinemas showing obscure films is that you don’t have to sit beforehand through the advertisements or trailers for other films. I find this a very unpleasant experience. Many of the trailers are for such spectacularly fast-moving and unrestrained violence that I avert my eyes, but in their own way the advertisements are just as bad. They are either of elephantine facetiousness or of such sophisticated knowingness that by the end of them I have sometimes not fully grasped what it is that they are trying to sell.

Are people influenced by such advertisements? Do they, as a result of watching them, go out and buy Dior perfume or Lacoste sports shirts? If they do, this surely rather undermines the case for universal suffrage. Can collective wisdom grow from individual idiocy?

Of course, there are those who argue that advertisements do not so much induce people to buy things that they neither need nor want as influence them to buy the particular brand of what they do need or want in preference to any other brand. On this view, demand is a zero-sum game; so that the purpose of the advertisement for Lacoste sports shirts, say, is not to induce anyone who wants or needs no sports shirt to buy a sports shirt, but to induce those who want or need to buy a sports shirt to buy a Lacoste sports shirt. But even if this were the case (and our whole economy depends upon it not being the case), it is not a very flattering view of mass psychology.