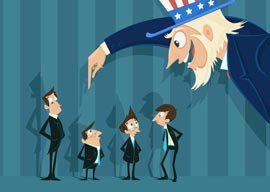 Is Barack Obama keeping a little list of ongoing litigation against the federal government that he intends to take a dive on during the interregnum after the 2016 election?

I would hardly be surprised. It’s an old Democratic tradition.

For example, its last day in office in January 1981, the Carter administration did long term damage to the U.S. government by abolishing the venerable civil service examination for hiring federal bureaucrats. The pretext was a consent decree throwing the derisory Luevano suit against the Carter Administration that had been rigged up by Carter’s Equal Employment Opportunity Commission and its allies on the left.

Ironically, civil service exams to reform the spoils system were one of the great causes of 19th century progressives. When President James Garfield was assassinated by a frustrated office-seeker in 1881, public opinion veered decisively toward awarding federal jobs by competitive examination.

During the 1920s, federal testing for job seekers became scientific. By the late 1970s, the federal government had a superb test, the Professional and Administrative Career Examination, which had been validated for 118 different positions.

Of course, blacks and Hispanics did less well on this test than whites and Asians. Therefore the EEOC tacitly sponsored a lawsuit and filed it under the name of a Mexican-American plaintiff who had failed the test, Angel Luevano.

For two years the Carter administration quietly conspired with liberal public interest law firms, the purported opponents in the suit. And as it was packing up, the Carter Justice Department signed a consent decree, approved by a picked judge, junking the civil service examination. Walter Berns wrote in Commentary in 1981:

This drastic measure, controlling the method by which, annually, hundreds of thousands of applicants for federal jobs will be examined, was adopted not by the [Office of Personnel Management], the agency in charge of examining and hiring, but by Justice Department lawyers working in the context of a lawsuit. Many of the agencies that would be immediately affected were not even informed that there was a lawsuit or, indeed, until one week before it was signed, that there was an agreement. The agreement was signed over the objections of the OPM, the agency most vitally concerned; it was signed even though officials in the OPM had thought that, after the November 1980 election, the whole scheme had been shelved. It was signed even though the Reagan transition team had been told that nothing would be done until the new administration had had the opportunity to study it. … It was signed simply because some lawyers in the Department of Justice and the EEOC arrogated to themselves the authority to decide what was good for the country, and it mattered not at all to them that they represented a repudiated administration.

The outgoing Carter Justice officials declared that no exam could replace PACE until a valid one without adverse impact on blacks and Hispanics could be devised. In the 34 years since, this has proven impossible. So, ever since, most federal jobs have been awarded by various temporary makeshift methods involving high degrees of subjectivity (making hiring more ethnically biased was, of course, the point of Luevano).

The ruling logic of our age is that any disparities in outcomes unfavorable to privileged groups are intolerable. Theoretically, his provides unlimited grist for the mill.

This is alarming to thinking individuals. I”m often asked: “How can necessary institutions continue to function when the reigning dogma is lunatic?”

For example, the obscure town of Ferguson, Missouri remains in the spotlight of national concern because in Ferguson the cops tend to be white and the criminals black. Something must be done about this!

Of course, this pattern is observable everywhere in the United States. Ferguson is an extremely average town. Liberal cities like Santa Monica, CA tend to have racial disparities in arrest rates that are much worse.

If the Obama Administration and the press were out to do to every municipality in America what they”ve talked of doing to Ferguson, the country would soon become a lawless Mad Max post-apocalyptic wasteland.

You might attribute this to hypocrisy, but the people wielding the power to pick out Ferguson and then relentlessly batter it out of spite when their hoax falls apart see themselves as lacking not in ethics but in power: two, three, many Fergusons is their desire.

But even individuals as ambitious as Eric Holder and George Soros have their limits.

A useful metaphor for understanding how the world works these days is the Eye of Sauron. In Tolkien’s The Lord of the Rings, the eponymous bad guy manifests himself as a giant eyeball that focuses on a hapless victim.

You do not want to attract the attention of the Eye of Sauron.

This is not to say that the Dark Lord of Mordor necessarily sees himself as the villain. In his own mind, perhaps, he’s the victim. Sauron is just offended that there are hobbits out there in their Shire holding hobbity views, just as the CEO of Apple, Tim Cook, is deeply affronted by the menace to morality posed by small town Indiana pizza bakers.

For the last nine months, for instance, unimportant little Ferguson has preoccupied what might be called the Eye of Soros (since the billionaire funded so much of the protest and mayhem). Not surprisingly, property values have dropped 46 percent in Ferguson, which is too bad for local homeowners, but then they should have chosen to invest in a locale less vulnerable to the Eye of Sauron, such as New York City.

As you”ll recall, after Ferguson turned into a factual fiasco last fall, the Eye briefly shifted its malevolent gaze to the death of a fat guy in police custody on Staten Island. But Staten Island is part of New York City, where the Eye is based. So after this attention inspired a black man to murder two cops in Brooklyn in vengeance, the NYPD, in effect, mutinied against leftwing mayor Bill de Blasio. The mayor backed down, more or less.

A soft coup by cops that brings the democratically-elected government of New York City to heel might seem pretty newsworthy. You probably haven”t heard much about it lately in the national press because all those globally important events in Ferguson, such as yesterday’s city council elections, take up most of the column inches that could otherwise be devoted to minor matters such as: Who runs New York City?

Moreover, there are certain limits to the Eye of Sauron, such as that it can”t be focused upon everything at once. That means that in the obscurity away from the mass hysteria, responsible grown-ups can cautiously rebuild order.

For example, the Eye was fixated upon disparate impact in fire department hiring for many years. Most fire departments use some kind of test of firefighting knowledge, which benefits guys who either care deeply about fighting fires or are quick learners. They tend to be more white than black or Hispanic.

But the same was true in Silicon Valley, where most employees were white or, disproportionately, Asian. Yet, the Eye didn”t glare at the technology industry the way it obsessed over the really important sector: fire departments. In the meantime, Silicon Valley got a lot of work done.

Lately, however, the Eye has turned from fire departments to the tech industry. Jesse Jackson had been repeatedly laughed out of the Valley, but now he’s given shout-outs by Apple’s Cook and millions by Intel. The gender discrimination lawsuit by Ellen Pao, who is sort of married to a sort of gay black Bernie Madoff named Buddy Fletcher, was treated as a media milestone until the jury threw it out.