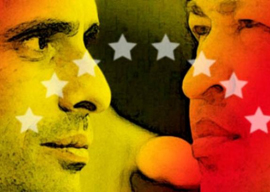 Although Hugo Chavez managed to beat rival Henrique Capriles Randonski in the October 2012 election, Chavez was soundly trounced by Death. Capriles Randonksi managed to gain 44.31% of the vote (the highest ever won by a Chavez opponent) and felt inspired to run once more against Chavez’s anointed successor, Nicolas Maduro, on April 14. With a mere 1.83% of the vote separating the two contenders, Capriles’s side cried fraud and demanded a recount that Maduro refused to grant them. They were not too pleased that Maduro’s supporters called them fascists”nor that his campaign propaganda showed Chavez’s face rather than his own. On April 19 Maduro was inaugurated at the Capitolio Federal and took up his tenancy at the Miraflores Palace and the presidential residence.

Rigged elections are commonplace in any banana republic. But a number of factors make this electoral outing and its aftermath noteworthy.

If Maduro does not have his predecessor’s ability to sew up his opposition without stimulating successful revolt, the country may be in for some real trouble. History is replete with regime changes following a strongman’s replacement by a less effective successor: Richard Cromwell, Marcelo Caetano, and Earl Long come to mind. Venezuela does not need more turmoil. Moreover, Chavez’s economic policies lacked one key ingredient: long-term success. If life becomes harder for the lower classes who were the backbone of Chavez’s support, it will become much more so for Maduro.

Capriles”for all that our government would be uncomfortable with his interior policy”would no longer pursue the anti-American road that made Chavez such a welcome guest in Havana and Tehran. This is perhaps why (despite the alleged widespread voter fraud in our own last two elections) the Obama Administration has said they will not recognize Maduro as president unless there is a recount. The OAS has seconded this call.

If Capriles has indeed won the election and peacefully takes control, then the “pink tide” of quasi-socialist leaders in Latin America may have reached its apogee. Certainly the Colombian government would be happy, since Capriles has vowed to help them with the FARC rebels in that country. But if Maduro retains control”or loses it thanks to a coup or revolt”American prestige in our sister continent will drop even lower and the pink tide will rise higher.