Class Rejects: A Guide to the British Aristocracy 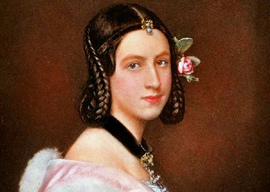 Please accompany me along the career trajectory of my English friend Minty. She receives an expensive education at which she is careful not to excel. She then wanders the world, trying on ethnic clothes and people. Having broken a few hearts in Rajasthan, she wanders home again. Some of her friends now have careers. This is irritating. And so she casts around for an appropriate métier. Something creative, obviously—for she is a creative person. Something pluralistic, which will draw on her unique travel experiences. Most of all, something that will go down well at the dinner table in Notting Hill.

Yes! She will design belts! Using ethically labeled material from India! Word goes out: Minty is starting a business. She acquires the steely glint of an entrepreneur. Her debt-free flat becomes a hive of activity. A grand opening is prepared at a friend’s gallery in Chelsea. Friends and second cousins congregate to “support Minty.” Someone produces a celebrity; someone else, a journalist. Flashbulbs fire. Belts are sold. A profit is turned. Minty’s business has come of age! She is a bona fide fashion designer! Yet soon the allure of commerce wanes under a molehill of paperwork. She turns her attentions to a certain fund manager who has proved an assiduous customer. Supported by her friends, she goes from Brave-Minty-the-Entrepreneur to Brave-Minty-Who’s-Married-Beneath-Herself. She is rewarded with a comfortable house and children, whom she quietly teaches to despise their father’s commercial bent. After all, meritocracy that goes beyond her immediate social group isn’t meritocracy at all. It’s just common.

“British aristocrats are the only people on earth among whom stupidity is not only accepted but prized.”

Now meet her brother Harry. In his early 20s, he eschews worldly possessions and grows dreadlocks. Keen to distance himself from the stigma of his birth, he renames himself Sid and seeks enlightenment at music festivals. Soon Sid too feels the tug of Self-Fulfillment; so he decides to form a band. He calls around the old-school network and a venue is produced. The same poor faithful who turned out for Minty now turn out for Harry. There is some confusion in the audience between those who know him as Harry and those who knew him as Sid. Still, someone produces a celebrity; someone else, a journalist. Flashbulbs fire. CDs are sold. He is a bona fide musician! But when the allure wanes, there is no fund manager to marry. He traipses back to the family pile, muttering about starting a forestry business. But it’s too late. Turns out all those schools from which Harry was expelled were the last roll of the dice. The house and forests are sold. For all his dissipation, Harry is rewarded with a nice house in London—only for the same process to play out, on a smaller scale, with his son Merlin.

Therein you have a microcosm of modern British aristocracy. A class system that used to distribute power and responsibility has collapsed into a source of therapeutic validation for the fragile individualism of its members. False merit thrives between narrow horizons —and few are narrower than the blue bloods of England. Enabling these delusions are the hangers-on who crowd Britain’s husks of aristocracy. It takes celebrities, journalists, and photographers to clothe their naked imperium and validate their feelings of uniqueness. And what does the intelligentsia get in return for this courtship? The answer, of course, is nothing. Because if Britain’s nobs know one thing, it is that they owe the world nothing. They have kept their noblesse but eschewed their oblige. In its place has come venality and codependence: rugged individualism without the actual ruggedness.

The historical way-markers to this implosion are well-documented. The First World War delivered a demographic and psychological blow of unprecedented proportion. Yet the next generation laughed into the void. The Roaring Twenties were a whirl of parties and bankruptcies. Only with the aid of married American fortunes did a carapace of their old values remained intact. The ’60s dissolved what remained of those values in a fug of dope and good tail. Those who didn’t succumb to the new addictions succumbed to old ones they could no longer afford. Titans of the British military like Sir David Stirling—cofounder of the SAS and a descendant of Charles II—gambled away their estates at the hands of unscrupulous Mayfair casino-owners who pretended to be their friends. The aristos were co-opted for their charm—read: money—by a new milieu that promoted the glamour of sexual and social transgression. Blinded by their inherited feelings of self-worth, they never realized they were being used by people who despised them. As a result, nowhere was Britain’s postwar political direction—dubbed “The Management of Decline”—internalized as effectively as among the people who had once driven its ascent.