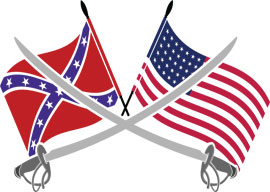 Talk about biting off more than you can chew! Since taking up the Civil War (War Between the States, War of Northern Aggression, whatever) as a part-time study, I’ve been getting emails from friends and readers asking me what I’ve learned.

The main thing I’ve learned is how impossibly much there is to learn. Goodness, how those four years have been worked over by authors! My own good-but-modest suburban library has a whole wall of Civil War books in the lending section. In the reference section there are several shelves more, on one of which lies a fine old edition of the supersized (14 x 17 inches) Official Military Atlas with painstakingly engraved topographical maps of all the battlefields.

You could spend months reading just the general histories. I didn’t know, until I found it in my library, that British military historian John Keegan, of Face of Battle fame, whom I encountered around the old Daily Telegraph offices once or twice, had written one. (It was not, to judge from the reviews, one of his best.) Then there’s the supporting reference material you need for a quick check of where you are in the great saga: I got the Library of Congress Illustrated Timeline at a discount and find it invaluable.

“History is written only by the victors? Not in the case of the Civil War.”

Not an inch of Civil War ground has been left untilled. I had no idea until reading Foote that the war was fought as far west as New Mexico. It was, and there’s a (short) shelf of books about that.

History is written only by the victors? Not in the case of the Civil War. Disappointed Southerners were taking up their pens before the guns had cooled. I’d heard the expression “Lost Cause” but didn’t know how early it was coined in a book title: 1866! Friends in the Dark Enlightenment have urged Lunt on me, and Dabney, Semmes, Seabrook, the Kennedys, and DiLorenzo. Everybody’s got an opinion.

And all that’s just the historians. Then there’s the literature: biographies, diaries, fiction, poetry. Good grief!

I have read a distressingly tiny fraction of all this, “looked into” some more, and marked yet more down as must-read. I’ve even done my first Civil War book review. I doubt I shall ever be a Civil War authority; but looking at that vast mass of scholarship engenders some skepticism about claims to authority. So you have an opinion about this general or that battle, about this weapon or that diplomatic maneuver? Have you read and evaluated all of the umpety-ump books arguing a contrary opinion? So far my Civil War explorations have been mainly an exercise in humility.

Recently, after a few months wrestling with Leviathan, I took a break and read Gone with the Wind. I never had, though of course I’d seen the movie way back. People had told me that it is a woman’s book, what publishers call a “bodice-ripper””a genre I have no interest in. Dim recollections of the movie seemed to confirm that.