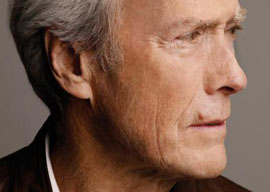 Baseball statistician Bill James’s most sobering discovery is that players peak at such a young age (27 on average) that by the time they become nationally beloved stars, their best years are usually past. This is true in the arts as well: By the time you get around to noticing somebody, his prime is likely over.

Then there’s octogenarian Clint Eastwood, whose Hereafter rolls out nationally this Friday.

Seven years ago, Eastwood was a 73-year-old actor-director in the decline phase of a once impressive career. While he had enjoyed a heartwarming late peak with 1992’s Best Picture, Unforgiven, by mid-2003 the last five movies he”d directed earned only one Oscar nomination (for Sound Editing on Space Cowboys).

But from 2003’s Mystic River and 2004’s Million Dollar Baby onward, Eastwood enjoyed what is perhaps Hollywood history’s most unlikely resurgence of acclaim. He has directed eight annual movies in a span during which The Social Network‘s David Fincher, a typical fortyish Type A-list director, has made only three. Eastwood’s recent movies have also been lavished with three Best Director nominations and nine acting nods. And his lone movie during that span without any Oscar love, Gran Torino, was massively profitable.

“By the time you get around to noticing somebody, his prime is likely over.”

For Transformers, producer Michael Bay hired Shia LeBeouf and Megan Fox to play the love interests so they wouldn”t distract from all the giant robots. In contrast, Eastwood’s no-drama method of making dramas assumes it’s less fuss to hire actors you find interesting, point the camera at them, and have them say their lines once or twice. Like a taller Woody Allen, Eastwood makes a movie on schedule, on budget, and then makes another one. Some inevitably fail, he assumes, but the more you make, the more likely you are to have some winners.

Eastwood’s late success has held out hope to aging baby boomers that experience, guile, and a sense of perspective will help them get by when they can no longer outwork the young bastards.