Closed? No Hurry. I’ll Come Back. 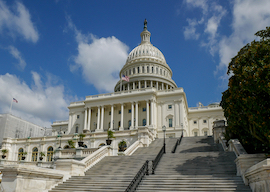 DALLAS—What if the country shut down and nobody gave a flip?

Entering day 6 of “The United States Is Closed,” I’m not seeing much evidence of panic or, for that matter, interest.

The most likely citizens to get their panties in a bunch—literally—are families who picked this week to go to Yellowstone or the Grand Canyon, only to find out that (a) the roads are open, but (b) the restrooms are closed. There are just so many times Dad can say, “Just go in the bushes” in subfreezing temperatures before the other occupants in the car start clamoring for the nearest Holiday Inn, which, in some cases, might be 150 miles away.

I haven’t been following that closely, but from what I understand, we need $5 billion to loan to Mexico so they can pay for The Wall, but I’m not quite sure who’s supposed to be ponying up and why we can’t come up with such a measly amount.

Okay, here’s an idea. We’ve ordered 2,663 F-35 fighter planes from Lockheed Martin at $90 million each. How many fighter planes do we really need? You know the last time there was an actual dogfight in the skies? Twenty years ago, when the Yugoslav Air Force made the mistake of sending up five MiG-29s. Score: NATO 5, Yugoslavia 0.

My point is that I think we can figure out how to fight China and Russia with 55 fewer fighters, bring that number down to 2,608 aircraft, and voilà!—draw up the papers, call up President Andrés Manuel López Obrador, give him a 2.25 interest rate over 30 years, put a clause in there that says if he falls behind on payments we can send the Navy down to Yucatán to claim the Cantarell Oil Field in the Gulf. And that’s his collateral.

No boots on the ground.

The Mexican Navy has three boats, we’ve got destroyers equipped with Tomahawk Missiles.

Pump the oil till we get our 5 billion repaid, throw a party in Cancún to give the oil field back.

Not that anybody is clamoring for the government to reopen. In fact, I’m starting to think having the government open for business is a vastly overrated state of affairs.

Unfortunately, doing it this way—shutting down the government once or twice a year to see who says “ouch” first—does have its dangers. I know everybody says, “No big deal, whenever they reopen everybody gets paid, doors reopen, everybody handles the backlog, yadda yadda yadda.”

Yeah, but in the meantime we’ve got 800,000 people being told, “Don’t worry, you’ll eventually get paid”—at Christmastime.

Maybe it’s just me, but I’m guessing that doesn’t go over that well in lower-pay-grade government households while the Yule log is burning.

So what we’re not taking into account is the Pissed-Off Bureaucrat Factor.

“I’m starting to think having the government open for business is a vastly overrated state of affairs.”

For example, nobody working for the TSA is getting paid right now. These people have X-ray machines and body wands. Do you really want the person who suspects your anus of contraband coming to work with an attitude?

Or air traffic controllers! Let’s say the guy was up all night with his crying newborn baby and he’s barely making enough money for the formula and some pilot is requesting permission to avoid turbulence by ascending from 28,000 feet to 32,000 feet and the controller sees a Lufthansa 747 vectoring in at a weird angle at precisely 32,500 feet and so he decides to say, “Yeah, you can probably do that. I could give you more precise information if I got paid this week.”

Do we really want FBI agents, who go to the gun range twice a month to stay in practice, walking around with no cash in their pockets?

Doctors and nurses in federal hospitals? Really? They have surgical implements and access to lethal drugs. Sure, there’s that whole Hippocratic-oath thing, but need I remind you of…

Doctor Hannibal Lecter in Silence of the Lambs.

Doctor Seth Brundle in The Fly.

Doctor Moreau in The Island of Dr. Moreau.

And, of course, the all-time screen champion, Doctor Jekyll.

These are all dudes who were being paid. Let’s not encourage surreptitious experimentation down at the clinic, especially since they’re probably already pissed off to be working at the government hospital instead of the private one.

Half of the Pentagon is “furloughed,” which is the fancy word we use when we tell them either “Don’t come to work” or “You’re required to come to work but you won’t get diddly-squat at the end of the week.”

The Department of State is closed. No problem if your passport is thrown into the back of a dresser drawer somewhere, but not a good thing if you just got arrested in Turkey.

The Department of Justice is closed. (Take that, Robert Mueller!) Not so terrible if your extortion trial starts Monday. Less desirable if you’re under 24-hour guard because you’re entering the Witness Protection Program after your testimony next week.

Meanwhile, members of Congress get paid.

Of course they do.

And there’s one cause for optimism: The Internal Revenue Service is mostly laid off.

They’ll still take your money, but they probably won’t hunt you down.

Forget refunds, but they probably won’t be showing up to padlock your office safe.

But is all this really necessary? After all, it’s Mexico that’s paying for the wall. I’m telling you, just seize some assets down in Juárez—it’s a one-day invasion—and we’re set.

What am I missing?

Well, I know what I’m missing. These are mere employees we’re dealing with here. Kitchen help. Janitors. Park rangers. Clerks. People who took government jobs so they could have security instead of making a lot of money. People who were told, “You’re a patriot for doing this repetitive work and so we’ll make sure you never have to wonder where your next paycheck is coming from.”