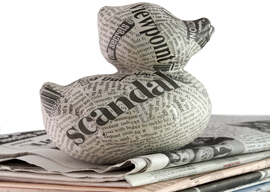 The Progressive crack-up of late 2014 began in early November: the voters rejected the Democrats” “Coalition of the Fringes“ campaign themes of Ferguson, feminism, and foreigners. It worsened with the shameful Michael Brown riots and the ludicrous fraternity gang rape libel, which has reached hilarious new heights over the last week.

As I”ve been pointing out for a decade, the Republicans do best among the married and content, while the Democrats prosper from the lonely and aggrieved. The candidacy in 2012 of the exotic “blank screen” Barack Obama had papered over the obvious cracks in the Democrats” confederacy of the margins, an alliance united largely by resentment of core Americans, such as white-bread paterfamilias Mitt Romney.

The embarrassing events of recent weeks have reiterated another problem the Democrats face with trying to assemble peripheral people into a majority (beyond the obvious difficulties of reconciling the interests and values of, say, black church ladies and Wellesley College gender-queers). This fringe coalition is fragile in another sense as well: if the underlying engine of your politics is hate (as suggested by all these hate hoaxes that are the KKKrazy Glue of the Obama coalition), you are going to attract and excite a lot of psychologically fragile fringe personalities. And they tend to repel the normal and healthy.

“The Times tries to be the Mitt Romney of the coalition of the fringes: responsible, sober, buttoned-down. It takes seriously its role in setting the agenda for the rest of the press.”

The “social justice” brand appeals to the unhappy and unsettled. More than a few aren”t quite right in the head: the criminal, the paranoid, the fantasists, and those obsessed with obscure ancestral vendettas. By working so hard to lure in individuals motivated by their anger at cisgendered straight white males, the progressives wind up encouraging and highlighting borderline personalities, such as Michael Brown (a mentally stable 6″4″, 290-pound black teenager would have been spending August at football practice, not knocking over convenience stores) and the cast of crazies in the U. of Virginia gang rape hoax.

The spirit of the age appeals most to the most troubled spirits. Consider this week’s terrorism in Australia. Let’s not even talk about the Iranian cleric refugee/terrorist. Focus instead on the media’s chosen heroine of tolerance, Melbourne writer Tessa Kum, who has been praised worldwide for coining, even before the victims were dead, the Twitter hashtag #IllRideWithYou to raise awareness about shielding Muslims from a theorized bogan backlash.

It turns out, however, that Kum is motivated less by humanitarianism than by her hatred of white people, which she articulated on her blog last month in a ten-thousand-word racist screed:

To dismiss this as “online drama” is an exercise of white privilege. …

I am not angry because I am struggling with mental illness.

I”m struggling with my mental illness because I am angry.

Having one does not invalidate the other. It is neither rhetoric nor melodrama to state that you, white person, are f****** with my depression. I hate you for that too.

The crack-up accelerated this fall with some undocumented shopping in memory of the late Michael Brown. Chaos in Democrat-run cities like St. Louis and Oakland does little to burnish the Democratic brand with voters. In Pat Buchanan’s recent memoir The Greatest Comeback, he recounts how at the Democratic Convention in August 1968 he and Norman Mailer stood together watching the liberal ruling party destroy itself as hippies battled Mayor Daley’s cops in the streets of Chicago. As part of the 1964 Democratic ticket, Hubert Humphrey had won 61.1 percent of the vote. In 1968, he earned only 42.7 percent.

The 2014 crack-up gathered more momentum over the last week as the U. of Virginia swindle cratered in humiliating fashion for the central wielder of the Megaphone, the New York Times. After obediently promoting the Obama Administration’s “rape culture” talking points, the Times was left dumbfounded when it turned out that handsome “Drew,” the organizer of the seven-man shattered glass initiation rite, doesn”t”to get all technical about it”exist.

Instead, Jackie had made him up, using phony text messages to induce jealousy in her let’s-just-be-friends friend “Randall.” (This is a variation on “catfishing.”)

The Washington Post broke this news a week ago by asking the three friends vilified in Rolling Stone by Sabrina Rubin Erdely for a look at their text messages. The Washington Times confirmed it this week by demonstrating that the texts received by “Randall” were sent via a spoofing website.

Is this the dumbest national media whoop-tee-doo ever: to be fooled for weeks by a silly, lovelorn teen’s machinations?

There has been some debate over who is to blame for what my commenter candid_observer aptly calls “Clusterfake:” Jackie, her fellow UVA rape activist Emily Renda, reporter Sabrina Rubin Erdely, or Rolling Stone magazine?