College is a Waste of Time 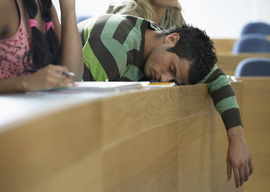 A new book called Academically Adrift: Limited Learning on College Campuses just proved what I”ve been screaming since I graduated: The college experience has become a total waste of time.

I was having my hair cut last week here in New York and the guy in the chair next to me was talking to his barber about this ridiculous fee. “By the time these kids graduate,” he said, “they”ve spent a quarter of a million dollars. Can you believe that?” We struck up a conversation, and it turns out he’s a professor at a city college where tuitions are a more reasonable $4,000 a year. “I”m sure NYU has higher quality education,” I said to him, “but you”re not going to tell me it’s ten times better than the city college.” The professor laughed and told me he actually teaches at NYU and it’s the same course he teaches at city college. The course was some bullshit about baby boomers and the hippie revolution, and I silently deduced that not only are city colleges as good as state colleges, they”re both not good.

I work in TV production and meet a lot of people who went to film school, including NYU graduates. Their stories contain a level of bureaucratic bumbling usually reserved for Charles Dickens novels. For example, in 2008 a young film student named Bryan Gaynor took a course called “Color Sync.” He was instructed to only use 16mm film, which is so expensive it would have cost him $4,000 just for the film stock. Editing it would be way more. Bryan tried to explain to the teacher that nobody on Earth uses 16mm anymore and he could get the same effect using a $400 mount on a high-def camera. The teacher refused to bend, and Bryan was forced to drop the class. Later he did what NYU calls an “Independent Study” where a student suggests a project and gets credit if a professor OKs it. Bryan did the original project he wanted to do in the Color Sync class using digital software and got the credit on his own. I ran into his mother when Bryan and I were at the Sundance Film Festival and asked her what it feels like to blow a quarter-million dollars on out-of-touch professors who teach antiquated techniques. “It’s as if I drive a Porsche off a cliff every year,” she said.

“Whereas Britain has last names and accents, the only way an American can say he’s better than you is a Harvard bumper sticker.”

So why bother? In Paul Fussell’s book Class: A Guide Through the American Status System, he argues that state colleges are the only way Americans can separate the bluebloods from the blue collars. Whereas Britain has last names and accents, the only way an American can say he’s better than you is a Harvard bumper sticker. It’s also a great way to ensure your offspring will mate with someone in the same income bracket. City colleges are filled with Polacks and (shudder) East Indians, so if you want your daughter to marry someone like Chelsea Clinton’s husband, you need to send her to an expensive school. Only thing is, kids don”t meet their spouses in college anymore. That’s a boomer thing. Today kids want a career before they get married, and they don”t tie the knot until they”re almost 30. The bumper sticker still has status, but that’s about all you get.

Today’s free market is moving too fast to be taught by a guy whose knowledge base is twenty years old. If a kid wants a job, he should skip college and become an intern. I”ve been hiring people for fifteen years, and I”d say 95% of them were interns first. Teachers are teaching because they can”t “do.” If you want to “do,” why listen to someone else tell you what it’s like? Just do it.