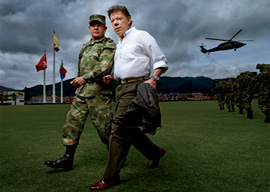 Before he was known as the bane of the FARC guerrillas, Colombian President Juan Manuel Santos had a reputation as a neoliberal apparatchik. Acting as Finance Minister during a 2001 debt crisis, he imposed a budget of “sweat and tears.”

But as president—when he’s not planning bombing raids against Marxist insurgents—Santos has been expanding the state bureaucracy’s size and scope to the extent that many of his former critics in Colombia’s soft-left-dominated media now praise his governing coalition.

Not wishing to disrupt the Latin American practice of generously distributing state-sector posts among supporters, Santos faced the challenge of satisfying the bureaucratic appetites of his “government of national unity,” which consists of all major parties except the far left Polo Democrático. Santos’s coalition rules as a de facto single-party government with no visible opposition.

Since single-party states are, in Evelyn Waugh’s words, “supported by a vast ill-paid bureaucracy whose work is tempered and humanized by corruption,” the first step toward finding suitable employment for thousands of cronies was the creation of three new ministries.

The Ministry of Justice is now carrying out functions previously performed by the Ministry of the Interior, albeit in a new headquarters and under a new minister.

“One of Colombia’s redeeming features had been that the multiculturalists had not taken over.”

The new Ministry of Work is headed by Rafael Pardo, a social democrat who until recently chaired the Liberal Party, a main pillar of Santos’s coalition. His task will be to “improve labor and union rights” in Colombia, a land where the union presence is so strong that Angelino Garzón, a former general secretary of one of the largest labor unions, is currently serving as Santos’s vice president.

The third new ministry is by far the most bizarre. While George Orwell’s Oceania had the Ministry of Plenty and a single party whose slogan was, “Who controls the past controls the future. Who controls the present controls the past,” the Colombian version of the Big Brother state contains the Ministry of Social Prosperity, which will soon employ 11,000 bureaucrats in charge of “eliminating extreme poverty.” The ministry includes the Center for Historical Memory, which aims to “investigate, elucidate, and reconstruct historic events.” Meanwhile, the Commission of Truth, apparently founded in place of Orwell’s Ministry of Truth, is in charge of “configuring a historical memory.”

Santos has also created a special Commission for Territorial Legislation; four High Councils within the presidency’s Administrative Department; a Presidential Program for the Integral Development of the Afro-Colombian Population and of the Indigenous Population; a Special Administrative Unit for the Restitution of Divested Lands; and an Adaptation Fund to finance reconstruction efforts after natural disasters.