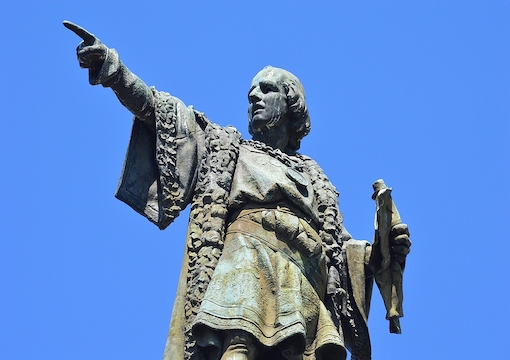 Last week there was a historic day in New York City with the inaugural celebration of Indigenous Peoples/Italian Heritage Day, a hybrid creation by craven politicians to placate the “Progressive” forces in our society demanding the end of any tribute to Christopher Columbus as a symbol of white racial dominance and brutality toward other ethnicities.

That it is an aspersion on his character and accomplishments was of secondary importance; he is the symbol, the symbol must be destroyed.

The effort to disparage the contribution of Columbus to world history began in the 1960s following the discovery of the remnants of Viking settlements in Canada, thus leading to the theory that America was discovered by Norsemen 500 years before he sailed on his epic voyage. This contention was dismissed by the vaudevillian entertainer Jimmy Durante, who famously observed, “I don’t see any blond-haired blue-eyed Indians running around.” Historians agreed, noting that the Norse, though hunting and fishing in Labrador over a period of perhaps 400 years, never remained for long periods of time and their small settlements were completely abandoned by the 15th century. So, Christopher Columbus discovered America, case closed. Children in schools across the United States could now safely go back to drawing three little ships with crayons on construction paper in the first week of October.

“There are several inconvenient truths that should be remembered and appreciated; not least of these is the incredible courage of Columbus and his crew.”

Oh, but no; an attack on his reputation was to come from another quarter.

A “Native American” activist in the 1990s stated, “We didn’t need to be discovered, we knew where we were.” Of course, this is ludicrous. It is analogous to a blind man riding in an automobile; he may know that he’s in a car, but he doesn’t know where the car is located.

On this Columbus Day, on a TV channel called NBCLX, a very young lady gave an overview of what she termed “Columbus myths,” stating: “Columbus didn’t discover North America, he only landed in the Caribbean, South America, and Central America.” Only. This, from someone who probably can’t navigate herself out of her parents’ basement. So, the insults, untruths, and ridicule continue, dovetailing nicely with the current campaign to denigrate all European contributions to human history and civilization.

There are several inconvenient truths that should be remembered and appreciated; not least of these is the incredible courage of Columbus and his crew. To those who have done it, crossing the Atlantic by ship can be both an awe-inspiring and terrifying experience. It is assumed by many that they will encounter other ships or the lights of ships on the horizon or planes overhead. There are none. The sensation is to be totally alone. Obviously, it’s not true, but it is, from time to time, necessary to remind oneself that they are sailing on one vessel among many and thereby the fear is assuaged. For the men in the three little ships that composed Columbus’ fleet, every passing day brought the knowledge that they were farther and farther away from everything they knew and loved.

There were no birds overhead, no sounds, no idea of how far they were going or how long it would take to get there. And the sensation of being alone in the middle of the ocean was not a sensation; it was a fact. They were the only human beings doing this, and only the captain had any idea of their geographical position and hence the way home. This raw courage goes unmentioned by today’s critics as if it were commonplace.

Then there are others who see him as the source of all that followed; and it is always negative. The warfare visited upon the natives by Europeans, the establishment of slavery, the introduction of diseases for which the local population had no natural immunity, the destruction of ancient cultures and religions; the list grows with each passing year. But the list of offenses denies historical records. Warfare between indigenous peoples was incessant, and the defeated were often enslaved, their culture destroyed and their gods desecrated. In fact, slavery would have been the least of the terrors awaiting them. And despite the instruction received in today’s colleges and universities, slavery is not a European invention. It has, unfortunately, existed throughout history in every part of the world. In addition, the illnesses brought by the Spaniards to the New World were not purposely transmitted and Europeans suffered from them equally.

Columbus was a seafarer and navigator, not a medical doctor. He had no knowledge of epidemiology; nor did the doctors of the time. Personal hygiene was practiced on the most rudimentary level, if at all. Life was short, the pursuit of pleasure and adventure more intense. We cannot judge their attitudes and actions based on our sensibilities, which are formed by our knowledge and the scientific advances of half a millennium; we have antibiotics, they didn’t have aspirin.

In short, Columbus is responsible for his discovery, but he is not responsible for every sinful act that occurred subsequent to it nor for the fate of every individual unfavorably impacted by it.

Neither can he be credited for the progress that ensued in the five centuries on the two continents that he brought to human awareness. However, he can be credited with providing mankind with a new stage and a new opportunity to continue its evolution, a new world of possibilities that would not have otherwise existed. And, perhaps more important, he inspired the spirit of exploration for countless others who refused to believe that the entire epic of humanity was confined between the shores of Greenland and the sands of Arabia, and, for that alone, he should receive our thanks.

In the plaza in New York City that bears his name there stands a commemorative column surmounted by a statue of the explorer. On the pedestal of the column is an inscription that reads, in part, “To the world he gave a world.”

For his epitaph, that should suffice.