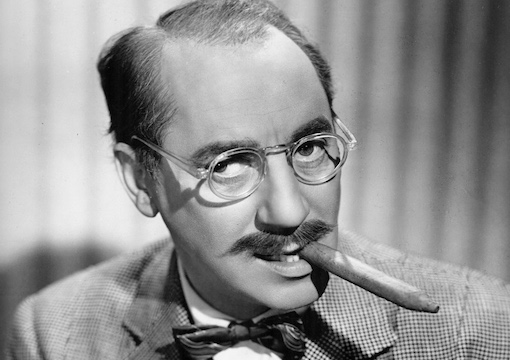 Rodney Dangerfield was the American Benny Hill, lewd, funny, and not exactly politically correct where the weaker sex was concerned. In America today there is no room for Rodney’s or Benny’s shenanigans, and leering at women is now commensurate to having one’s rocket polished in broad daylight, perhaps even more so. I find it amazing to be bombarded daily by the shameless gimmickry, stupidity, and smuttiness of television, but deprived of talented comedians who tend to get on the wrong side of hatchet-faced feminists. The saccharine cesspool of late-night talk shows, the utter banality of actors and actresses talking about their latest film—this is what our modern culture has become.

Never mind. I don’t watch these horrors, so why am I complaining? I suppose it’s because of my Christian concern for my fellow men, and women, whose brains are ripped, trashed, blasted, and destroyed by the minute. There, now you know how I feel about TV and the movies. Mind you, last week I briefly looked at a Rodney Dangerfield comedy of long ago. His wife is an art collector and is showing her paintings at her garden party. She’s also rather promiscuous because Rodney is looking suspiciously at all sorts of good-looking younger men hanging around. Then an old friend of his comes up and tells him, “I love your wife’s Klimt.” “You too?” splutters poor Rodney, looking destroyed. I burst out laughing, as did Robin Birley when I told him afterward at dinner, because that’s the old slapstick, risqué humor that most normal men love.

Spectator World, the Spectator edition in America, recently had three comprehensive pieces on comedy in the age of cancellation, and a very thorough job it was. The trouble was I didn’t know any of those mentioned, and of the few whose names I recognized, none of them did I find remotely funny. This is my fault, if “fault” is the right word, not theirs. I am a Buster Keaton/Marx Brothers fan, much too old for contemporary jokes about culture wars, student angst, or insults against Trump. I used to go to the Copa for stand-up comedy during the ’60s, with “Take my wife, please”-type opening lines from old, ruffled comics such as Henny Youngman, who had come up from down-and-dirty pool halls in the suburbs. “One more remark out of you and I will remove the red light from your mother’s house and you’ll both starve to death,” was a typical comeback from the guy on stage after some wise guy had rattled him from the audience. Jackie Mason, no longer with us, was a product of that school. “How do you tell the Christians in this town? They’re the ones waiting in line.” I loved Don Rickles, who insulted everyone in the audience without ever using a swear word, as none of those old-timers ever did.

But the funniest of all were the Marx Brothers. When my sister-in-law, Victoria Schoenburg, married Harpo Marx’s grandson, I announced in these here pages that I was finally related to the brothers, the zaniest and funniest of all comedians. Then I read that Harpo used to correspond with T.S. Eliot about matters intellectual, but my new brother-in-law had little to add. Harpo leered whenever he saw a pretty girl, and as he always carried an old-fashioned horn with him, he would squeeze it nonstop. Beep, beep, beeeep, the simplicity of it, the childishness, evoked paroxysms of laughter. Today he would be arrested, needless to say, but it is extremely funny to watch the man who never spoke a word, roll his eyes in sexual ecstasy and squeeze the horn relentlessly.

Incidentally, while I’m at it, the old wolf-whistle that hard hats used to let out upon the appearance of any pretty girl no matter how high up they were on a skyscraper has disappeared along with high-button shoes, ladies who blush, and people who never use the f-word. Among the first to use it nonstop on stage was Richard Pryor, and now all comedians rely on it to raise a laugh. But overuse of the f-word has only made it less funny than it ever was. Humor today has gone down Swanee, replaced by didactic political crap.

Misogyny, homophobia, and transgender wars do not make for good comedy. And the so-called comedians concentrating on such topics seem to be delivering lines formed by algorithms using data input. If this is comedy, I’m Margaret Dumont, the very large lady Groucho used as a foil on the dance floor. She: “Come closer, closer.” Groucho: “If I come any closer I’ll be behind you.” Being in line with modern-day pundits does not work for comedy. Which brings me to obscenity without humor, the specialty of two very unattractive women, Amy Schumer and Lena Dunham. Both female comics talk about their bodies and below-the-waist infirmities in terms that would embarrass a gynecologist. They pander to the lowest forms of human sexuality, and the horror of it is that people actually pay a lot of moola in order to hear such stuff. I prefer that old chestnut of Groucho’s, and his ad lib on his quiz show: “Welcome, are you two married?” “Yes.” “Any children?” “Yes.” “How many children?” “Thirteen.” “Thirteen children, how come?” “I love my wife.” “Well, I love my cigars, but I take them out of my mouth once in a while.” Come back, Groucho, please!