Come and Get Me, You Fairies! 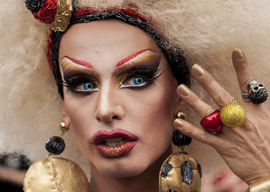 Normally I wouldn”t subject you to two columns in a row about Canadian goings-on, but I see my new topic has already been deemed worthy of attention here, at “The Week That Perished.”

Trudeau is pushing a bill that would protect Canada’s eternally vulnerable transgender community by sending offenders to prison for up to two years if they dare commit the unpardonable sin of uttering “anti-transgender speech.”

(And before you scroll down to the comments to lecture me on your clearly overrated First Amendment, American readers should bear in mind that New York state, for one, already has similar laws on the books, and they carry fines of up to $250,000. And this Oregon “transmasculine” teacher got $60,000 because her colleagues wouldn”t refer to “it” as “they.”)

No, the Canadian law hasn”t been passed yet, but Trudeau’s Liberals have a majority in Parliament, so they can theoretically shove through any law they want to. The Grits” priorities are weed, “green” bullshit, assisted suicide, and, well, another kind of “assisted suicide”: fighting on the “Allies“ side in “World War T.” When it comes to chicks with dicks, the Libs are determined to dress on the right (that is, left) side of history.

“Soon we”ll all be obligated by law to say and think the same thing”or else. I choose door No. 2.”

(Then again, so are the Conservatives. At their convention last weekend, the party voted overwhelmingly to drop their official opposition to gay “marriage,” quoting”apparently without irony”their former nemesis PM Pierre Trudeau’s maxim that “the state has no place in the bedrooms of the nation.”)

More proof that we normals are losing this fight? Trannies are rewriting not just the laws of the nation(s) but of politics and other facets of society. You know the old saw about “a dead girl or a live boy”? Well, as Gavin McInnes reported here, the guy behind the North Carolina bathroom bill is a registered sex offender who “fondled a 15-year-old boy when he was 20.” And…Bruce Springsteen and his fellow state-boycotters either haven”t heard or don”t care.

A few leftists break rank and declare their exasperation with all things “trans.” Articles like “My Dad Was Transgender. Why I Still Think Gender Can”t Be Changed” appear with semi-regularity. Activists admit they”ve been pulling our every remaining dangling appendage this whole time:

“We know trans people are one of the most targeted groups. And they experience violence at a much higher rate than other people,” he said.

None of that matters.

Instead, Canada’s largest newspaper, and one major private broadcaster, have recently been celebrating this “transgendered dad” (and longtime human toothache) who “breastfeeds.” If you”ve got a dodgy gag reflex, you”d best skip over the “how,” although listening to the anchor declare, “It’s a wonderful story and I appreciate you coming on and telling us about it,” is just about as puke-inducing.

Soon we”ll all be obligated by law to say and think the same thing”or else. I choose door No. 2.

I”ve said for years that transsexuals are delusional amputation fetishists, and way too many are manipulative narcissistic bullies and liars, and often prone to violence.

That if they really do commit suicide in epidemic numbers, that’s because, well, they”re clearly insane.

Trannies were cute and funny when they were in movies once in a while”hell, I actually watch The Prancing Elites sometimes, because (I dare you) it’s kind of hard not to”but now they”re everywhere, and I”m sick of them.

I”d compare trannies to kudzu, but kudzu turns out to be mostly a rural legend, whereas trannies are a for-real creeping menace, spreading mendacity and extortion across the land and costing taxpayers untold millions.