Come on in, the Plague Is Fine 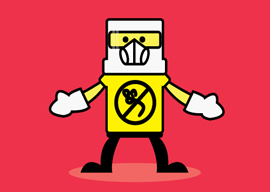 People are afraid of Ebola, and they have a right to be”but they also need to understand it.

Ebola is a highly dangerous viral infection, killing more than half of those infected. The death rate is higher than that in cases without hospital care, lower when supportive therapy (oxygen, intravenous fluids, dialysis) is available.

It is transmitted by direct contact (through breaks in the skin or mucous membranes) with every kind of body fluid, from blood to sweat to semen. At this point, there’s no known example of airborne transmission between people: be thankful for that. We also know the virus doesn”t last long in the open air.

It’s clear that Ebola isn”t all that contagious”nothing like influenza or measles, which are airborne. It seems that it can only spread widely in favorable conditions”either crowded West African slums where people’s burial customs expose them, or, paradoxically, in less-than-perfect hospitals, where carelessness and improper gear leave medical personnel vulnerable. I say carelessness, but “errors” might be a better word. Working in a hospital with no resources or electricity, filled with desperately ill people who are bleeding and puking, seems to increase almost everyone’s error rate.

“Oh, undoubtedly they”re thinking something nonsensical about the horrors of profiling black Africans, but let’s be real: we”d quarantine Sweden if they had something like Ebola, be they ever so blond, and we”d be right to do so.”

Another factor that limits Ebola’s chance of becoming the next pandemic is its sheer virulence, coupled with direct person-to-person transmission: people are only infectious for a few weeks at most, after which they”re either dead or immune to that strain.

Ebola is not originally a human disease at all. Its reservoir is thought to be fruit bats, which carry the virus, but don”t seem to get very sick.

In any epidemic, the key statistic is the number of new cases per case. If that parameter is greater than one, the number of cases grows exponentially, and you have an epidemic. If less than one, the disease dies out. That parameter may not be the same in every environment: it’s obviously greater than 1.0 in Liberia, but as long as Americans don”t have their entire extended families handle the body at a funeral, it’s almost certainly well under 1.0 here.

So”what short-term risk do Americans face from infected people flying here from West Africa? Small national risk: under current policy, you might see a sick West African visitor infect one or two Americans, likely hospital personnel. And some of those infected people would die, even with good care. Second question: Why take this risk? There’s no reason to do so. The administration claims that limiting incoming travel from Liberia, Guinea, and Sierra Leone would backfire. Why do they say that?

I”d say that it’s because they”re nuts, which is often the deep reason behind federal action. Oh, undoubtedly they”re thinking something nonsensical about the horrors of profiling black Africans, but let’s be real: we”d quarantine Sweden if they had something like Ebola, be they ever so blond, and we”d be right to do so. At the end of the day, nuts, like I said.

Anthony Fauci, director of the National Institute of Allergy and Infectious Diseases (part of NIH), said a travel embargo on West African countries that are struggling with Ebola would make it much harder for them to control the virus.

“You isolate them, you can cause unrest in the country,” Fauci told Fox News Sunday. “It’s conceivable that governments could fall if you just isolate them completely.”

So, we”re supposed to believe that blocking flights to the U.S. for the duration would destabilize an African government. Riiight. But Fauci had to say something. He has no logical explanation for the administration’s position”but then, none exists. He’s just being a loyal bureaucrat. Everybody and his brother are closing that door: Air France and British Airways have both temporarily halted flights. Since they read the polls, if nothing else, the Obama Administration will probably end up doing the same.