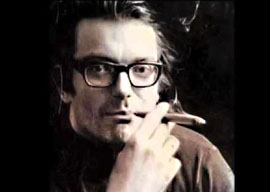 Had history veered off course ever so slightly, we”d mock evangelical Christians for playing George Carlin albums backwards and listening for demonic messages in the resulting garble.

This might have happened if all those witch-hunting (and never quite finding) fundamentalists had known that the guru of late-20th-century comedy was a self-described warlock who cast magic spells onstage.

Del Close is the founder of “long form“”the snotty gnostic cousin of populist “games”-based short-form improvisation. He is to comedy what Les Paul is to rock: the dearly beloved, slightly obscure innovator who altered his discipline dramatically while making countless other artists rich and famous.

(That said, there’s no evidence that the late luthier worshiped Lucifer.)

Few people beyond the comedy cognoscenti know Del Close’s name, but that may change if either or both of two biopics about him are ever completed.

(The Delmonic Interviews, an all-star 2002 film tribute to Close, is screened rarely, and then only to acolytes. See “gnostic” above.)

That such projects even exist demonstrates the worshipful regard in which Close is held by former students such as Bill Murray, Betty Thomas, and Mike Myers, all of whom were connected to those yellow-lit movies at one point.

From the late 1960s until his death in 1999, Close taught long form at Second City Toronto and Chicago and served as SNL’s “house metaphysician.” No wonder the names of his other devoted disciples read like a comedy hall of fame: Dan Aykroyd, John Belushi, John Candy, Andy Dick, Chris Farley, Shelley Long, and Gilda Radner, to name a very few.

At the risk of sounding as Kool-Aid drunk as those evangelicals obsessed with backmasking, there’s something a bit…Faustian about that list, what with everyone on it doomed to one sort of hell (addiction) or another (one-hit-wonderhood.)

“Witchcraft in Hollywood? That explains everything,” frustrated culture warriors will joke. Except”blame my cradle Catholicism”I”m not sure how funny some of this is.

Close’s longtime collaborator Charna Halpern is helming one of the movies about his life. In a 2012 interview, Halpern describes their first meeting:

I heard he was doing a show at an art gallery with some of his students from Second City. And Del was a witch. He was Pagan. I went there one night and he had his robes on, and it was dark and it was Halloween so he made it really scary. He had his magic wand….[H]e was evoking gods of the East and demons of the West….

Halpern adds that she was into Transcendental Meditation at the time, so she and Close fought about whether or not the students were sufficiently “white lighted,” that is, protected from demonic possession, what with all these invocations in the air. Close shot back, “I protected the building!” Unimpressed, Halpern walked out but didn”t stay away for long.

In the definitive biography of Close, one student complains to a Second City producer that “Del is invoking the Devil” in class. His creepy “invocations” remain legendary in the improv community and are featured in his classic textbook. In one exercise, students “invoke a “god” that they create themselves from their own group vision,” usually an object they are supposed to “worship.”