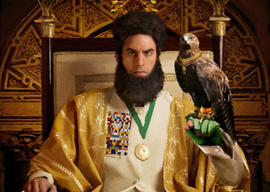 The Dictator is Sacha Baron Cohen’s fourth and”surprisingly”funniest movie, a definite improvement over his biggest hit Borat. But critics, who raved in 2006 about how Borat exposed the anti-Semitism throbbing in Red State America’s heart, are now having second thoughts about Baron Cohen’s unapologetic Zionism. As the Great Girls Whiteness Crisis of 2012 suggested, during the serious business of Obama’s reelection campaign anybody with a sense of humor is automatically suspect.

Baron, a sterling British comedian who is a sort of elongated Peter Sellers, plays Admiral General Aladeen, strongman of the North African rogue state of Wadiya, which is building a nuclear missile to menace Israel. The civilized world threatens air strikes against Wadiya unless Aladeen comes to New York City to grovel. When the vain buffoon finally arrives, his chief aide (portrayed by Sir Ben Kingsley) secretly has the tyrant’s famous beard shaved off and replaces him with his own impersonator, a dim-witted goatherd. The body double duly announces that Wadiya will surrender to the forces of democratic humanitarian interventionism in five days.

Meanwhile, the unrecognizable but unrepentant autocrat is sheltered by a naÃ¯ve Brooklyn leftist. She’s played by the Anna Faris (Scary Movie) with a pixie hairdo, so Aladeen addresses her as “lesbian hobbit.” She kindly gives him a job at the inefficient and unsanitary feminist food co-op she tries to manage. By force of his authoritarian masculinity and awareness of human biodiversity, he whips her team of slackers and refugees into shape. For instance, the despot takes the seven-foot Sudanese Dinka, who comes from a tribe that has never heard of money, off the cash register and puts him to work stocking the top shelves. Thus, the co-op regains the contract to cater Wadiya’s capitulation ceremony, at which Aladeen plans to kill his double and tear up the new constitution.

“Humor’s chief engine is hostility, and Jewish hostility has driven comedy forward for much of the last century.”

Ever since Republican-allied Bibi Netanyahu‘s 2009 election in Israel, America’s liberal press”presumably out of fear it might threaten Barack Hussein Obama’s reelection”has been warning that “Islamophobia“ is an evil comparable to homophobia.

Yet Baron Cohen, whose grandmother lives in Israel, appears not to have gotten the memo. The Dictator indulges in almost every derogatory stereotype I”ve ever heard about Arabs and/or Muslims. And guess what? Stereotypes are funny, especially if motivated by an ethnic animus as deep-seated as Baron Cohen’s. The star, who speaks Hebrew, lovingly fondles all the throat-clearing sounds in Aladeen’s similarly Semitic Arabic.

Critics are finally starting to get the joke about Baron Cohen’s movies, or are at least getting worried that there is a joke. For instance, poor Andrew O”Hehir wonders in Salon, “What exactly is Sacha Baron Cohen up to?”

In the past, Baron Cohen’s satires have generated reams of excusatory explication about how the crude jokes are actually so meta that they”re really politically correct. But that gag is running a little thin with The Dictator, which is directed by Larry Charles (Larry David’s second fiddle on Seinfeld) and written by Baron Cohen, Alec Berg, David Mandel, and Jeff Schaffer”none of whom, I”ll hazard to guess, are Arabs poking gentle fun at their own people’s foibles.

What’s the common denominator behind Baron Cohen’s four movies, Ali G Indahouse, Borat, Bruno, and now The Dictator? This conundrum has baffled the best minds in the film criticism business. Yet consider why Baron Cohen goes out of his way in The Dictator to ridicule a seemingly harmless Brooklyn grocery co-op. A little Googling dredges up the five-year-long battle within the Park Slope Food Coop over whether to ban Israeli products to protest oppression of the Palestinians.