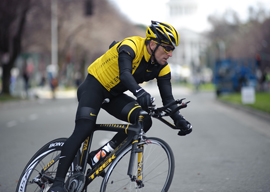 I was watching the synchronized diving”one does odd things at Olympics time”and when Viktor Minibaev and Nikita Shleikher, the Russian competitors, stepped onto the platform, the British commentators remarked that they were greeted with boos. This was tough for the Russian boys, and may have been unsettling, but sadly it wasn”t unexpected. After the revelations about state-sponsored doping in Russia, and the International Olympics Committee’s decision to hand responsibility for deciding whether Russian athletes should be allowed to compete in Rio over to the individual sports organizations, it’s natural that suspicion should be directed at those Russians allowed to take part. Nevertheless, one feels for those who are clean but unavoidably tainted by association. As it happened, Viktor and Nikita performed respectably, but were well out of contention for medals. So I”d like to think that this proves them innocent, even though it ain”t necessarily so. For one thing, none of us ordinary spectators”arguably nobody except chemists”have any real idea how doping affects or improves performance.

These Games have begun in a nasty atmosphere of suspicion, mostly”so far”directed at Russian and Chinese competitors. But not entirely: British cyclist Lizzie Armitstead was allowed to take part despite missing three dope tests; the Court of Arbitration for Sport downgraded that to two missed tests and gave her the okay. French cyclist Pauline Ferrand-Prevot said the Court’s decision was shameful. The willingness of clean athletes to denounce rivals with a history of doping has been one of the features of the first days of these Games. Lilly King, American swimming gold medalist, refused to shake hands with the Russian silver medalist Yulia Efimova (who has served bans in the past), and the Australian Mack Horton dished out the same treatment to his defeated Chinese rival Sun Yang, who went on to win gold in another race. Righteous indignation is fine, so long as it isn”t self-righteous. Yet the atmosphere is so feverish that even righteous indignation may seem suspicious. After all, one reflects, didn”t Lance Armstrong, the most notorious cheat in a sport with a long history of performance-enhanced cheating, pose as the heroic cleanest of the clean, denouncing cheats?

“So these Olympics are tainted, as they have been for years, and will continue to be.”

Russia and China may indeed engage in state-sponsored cheating, just as East Germany used to do in the good old Communist days, but private enterprise in the West doesn”t necessarily lag behind. The men’s 100 meters, itself made infamous by Ben Johnson’s drug-assisted gold medal in Seoul, may be between the holder Usain Bolt and the American Justin Gatlin. Gatlin has twice been suspended for having taken illegal medication. The second suspension, in 2006, was originally for eight years; this was later cut to four. He is now at the age of 34, in the veteran stage. Should he have been permitted to return to compete? Arguably, yes; he”d done time, served his (reduced) sentence. But if he wins gold, how many will be happy? How many will suspect that he has found a better chemist? That suspicion might be groundless; it would nevertheless be aired.

In any case, Gatlin’s story”like Efimova’s and Sun Yang’s”raises another question: Should suspended cheats be reinstated, given a second chance, or should suspension be for life? One’s sense of natural justice answers the first question in the affirmative. Rehabilitation should be possible, and in ordinary civil life someone who has been found guilty in the courts and served his sentence is generally permitted, even encouraged, to make a fresh start. We speak of wiping the slate clean. Fair enough, that’s the decent way to behave. But, of course, there’s another aspect to sentence and punishment: the deterrent one, the effect on others. If an athlete knows that it’s a case of “one strike, and you”re out for life,” the temptation to take whatever you are offered with the promise of improved performance is likely to be considerably less attractive. You are less willing to take a risk if you know that discovery means the end of your career, the death of your ambition.

This is easily said. Reality may be more complicated. In the first place, many athletes are young and ignorant. They know nothing about what is on offer from their coach or, worse, national organization. They haven”t a clue about the nature of whatever dope they are urged to take. If they are assured, first, that it is legal, and, second, that it will improve their performance and their chance of winning a gold medal, it takes resolution to say no. After all, why shouldn”t they believe their coach or medical adviser? The doped athlete may also be duped.

This is speculation, of course. It would be interesting to know what goes on in their heads. I come back, as one tends to in this sort of conversation, to Lance Armstrong. What did he really believe? Did he, for instance, convince himself that the advantage he got from the blood replacement strategy was legitimate? He made such a public display of being clean. Was he an out-and-out hypocrite? It’s hard living with hypocrisy unless you have persuaded yourself that you”re straight and honest, not a hypocrite at all. Perhaps to deceive others, as Armstrong did successfully for so long, you must first deceive yourself?

Even when we acknowledge that certain medical interventions may improve performance, it’s difficult to measure the degree of improvement. The trouble is that any marked improvement becomes an occasion for suspicion. A change of diet or of training routine may effect a greater improvement than anything a chemist offers. Novak Djokovic was a very good tennis player who became a great one when he took dietary advice; nothing wrong or illegitimate about that, and nobody of sense would suggest otherwise.