Common Sense on the Ropes 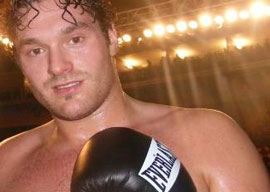 It is strange what moves people to action, if signing a petition counts as action”which, given the sedentary nature of so much of the population, I suppose it might do. According to a newspaper article I have just read, 140,000 people in Britain signed a petition to have a man with the improbable name of Tyson Fury removed from the list of candidates for the BBC’s completely vacuous and unimportant title of Sports Personality of the Year.

Fury is a boxer who is 6 feet 9 inches tall and comes from a family of Irish Travellers (once known as tinkers), though he was born in England. His father was a bare-knuckle fighter who named his son after the boxer and all-round role model Mike Tyson, who distinguished himself by (inter alia) running through his $300 million earnings, being convicted of rape, and biting off part of an opponent’s ear in the ring. Fury is now heavyweight boxing champion of the world.

Again according to the article, “Fury provoked outrage when he equated homosexuality and abortion to paedophilia and saying a woman’s “best place is on her back.”” The article does not say who exactly was outraged by these remarks”who was furious at Fury, as it were”but I have noticed that in British newspapers such phenomena as anger, fury, and outrage seem often to subsist independently of anyone who feels them, and so are a kind of meteorological phenomenon, or resemble the pain descried by Mrs. Gradgrind in Dickens” Hard Times:

“We live in strange times when people are as likely to be offended by politeness as by its opposite.”

That guardian of public morals, the British Boxing Board of Control, called upon Mr. Fury to explain himself. The BBBoC later expressed itself satisfied that he, Fury, “expressed regret that he caused offence to others, which was never his intention.”

I was rather reminded of the commentary that often follow articles published online, in which those who comment turn on each other with contumely if not with rage, having forgotten what the article was about in the first place, utilizing such powerful arguments as “You f—-ing idiot, can”t you f—-ing think, you moron?””to be followed by a comment that has been removed by the forum moderator because it did not “meet our community standards.”

“What standards are those?” one wonders. It would be an interesting experiment to try to write a comment so abusive that it did not “meet our community standards.” Or perhaps comments are excluded because they are too polite: We live in strange times when people are as likely to be offended by politeness as by its opposite.

The BBBoC reminded Mr. Fury of the “heavy responsibilities” that went with his boxing title, which he subsequently claimed to “understand””as, presumably, he had not understood them before. The British Minister of Sport”O brave new world that has such people in it!”reminded him that he was “a role model.”

The minister is called Tracey Crouch, best known previously for having protested that she had not been allowed to play on the all-male Parliamentary football team. It seemed not to occur to her that her remark about Mr. Fury undermined very fundamentally the case for democracy: For if a population really took a boxing champion ex officio as a role model, it was certainly not to be entrusted with the vote.

Professional boxers are always brave, of course, for it undoubtedly takes courage (or is it foolhardiness?) to volunteer to make one’s head the target of other men’s fists in front of a baying crowd. Boxers are also men of determination in their training and discipline. But bravery and determination are not virtues independent of the ends to which they are put: A man may be brave and determined, after all, in the pursuit of an abominable goal. I know no strictly scientific evidence for my opinion, but I doubt that, taken as a group of men, professional boxers are particularly admirable.