Compliments for the Corpulent 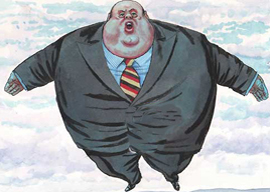 Nicholas Soames is Winston Churchill’s grandson, a Conservative member of Parliament since the early 80s, a very large man whose food and drink intake is legendary, and an old friend of mine with whom I used to get into terrible trouble. Soames has been married twice, his first wife having indiscreetly answered a hack’s question about his lovemaking as “like having a wardrobe fall on top of you with the key sticking out of it.” An amicable divorce soon followed.

Soames holds no grudge against his ex, but if he did he might soon be able to have her jailed for committing a hate crime. This is a proposed addition to English hate-crime legislation that could make outlaws of countless schoolchildren who use the word “fat” or “fatty” against another student. It adds a criminal taint to teasing and rebrands it as a hate crime on a par with racism and homophobia.

No, it’s not a joke. Members of Parliament in the UK are calling for the law to be changed so that such teasing will make criminals out of everyone on this crowded and rainy island. God help us if it becomes a crime to call someone a fatty. Next we”ll have people with ginger hair being protected, short folk ditto, and on down the line.

“God help us if it becomes a crime to call someone a fatty.”

The ex-captain of England’s national soccer team, a terrible hood by the name of John Terry, has just been declared innocent after a very expensive public trial at the Old Bailey for having allegedly called an opponent a black c—- (down-market word for vagina). The legal judgment was not about the crude word for female anatomy but whether Terry had racially abused his opponent. During the trial it emerged that his black counterpart had not even heard Terry’s cussing but was encouraged to sue by politically correct do-gooders who somehow monitored the cussing from the stands.

However Orwellian it sounds, this is modern Europe. Terry got off because it was never proved beyond a reasonable doubt that he had called Anton Ferdinand a black expletive”too much screaming by everyone involved”and that it was not established that what he said was intended as an insult. (I know British footballers, and they make American NBA and NFL players sound like Professor Higgins.)

What is preposterous is the assumption that sneering bureaucrats know what is good for us and that calling someone a fat jerk can soon land one in the pokey. The thinking behind the latest Orwellian law is that too many children are worried about their body image”whatever that means”and lest they fall ill as a result, measures must be taken to protect them. Oy vey! What happens if this so-called law crosses the ocean and African American schoolchildren get ahold of it?