Confessions of a Failed Slut 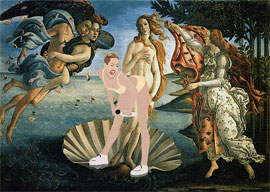 One afternoon very late in the 20th century, my then-best friend and I were walking back to the office with a coworker after lunch.

“But I don’t think the poor girls should be shamed,” my friend put in, a bit meekly.

“I do!” our coworker shouted gleefully”in unison with me.

My friend and I had been practically sisters since age sixteen. We’d reached our thirties having had a grand total of three disagreements in all that time. And this was one of them. The whole “casual sex” thing had always been a sticking point”or should that be “wet spot”?”between us.

“My attempts to ascend the heights of zeitgeisty sluttery were an abject failure.”

The embarrassing truth is, however, that my attempts to ascend the heights of zeitgeisty sluttery were an abject failure. Like a midget’s dream of signing with the Lakers, the project was doomed from the (very late) start. (I screwed up the courage to dispose of my virginity at the advanced age of nineteen.)

In the first place, I was never a head-turner and could never be bothered”as had my equally dorky pal”to cultivate a bubbly, “open for business” personality to compensate.

Even if I had been more attractive, “events, dear boy” conspired to thwart my halfhearted ambitions: a temporarily crippling chronic illness, AA’s “first year” rule, the AIDS scare.

For two years, I wasted my then-22-inch waist on a trust-fund anarchist with an aversion to toothbrushes, then spent another three dating a sinewy Heath Ledger clone with Asperger’s who stuck around longer than I’d expected.

Add to that my Catholic education, such as it was. Even in that post-Vatican II folk-Mass era, I still absorbed the barely articulated notion that sex was A Very Special Thing and not a consequence-free recreational activity like riding a rollercoaster (except in the nude).

As a result, my “number” (as the kids call it these days) is so low, I’m reliably informed that there are regions of the globe (such as certain Australian provinces) where I would still technically be considered a virgin.